In February 2018, an anonymous user on Reddit, posted a picture of what happens to aluminum when a ½ ounce of plastic, the size of a pencil eraser, impacts at 24,104 Kph (15,000 Mph) in space.  Leaving a five-inch hole, the test, performed with a light-gas gun illustrates how much damage a tiny amount of space debris can do.

Several articles have been written here, discussing the exciting and hopeful NewSpace activities being planned and tested for deployment.  NewSpace, a term that encompasses all aspects regarding the commercialization of space, is a heady topic with companies vying to launch thousands of new satellites into LEO (Low Earth Orbit) over the next few years.  Many challenges have been discussed – launching these craft, dealing with the effects of space weather on the upper atmosphere, communicating with lasers in space, new frequencies, frequency re-use and modulation schemes to increase throughput and coverage, ground infrastructure to support the satellites, and integration with emerging cellular standards like 5G.  There is yet another challenge…

NASA scientist, Donald J Kessler, proposed in 1978 that a chain reaction of debris exploding in space could end up making it impossible to use satellites, and ending many other space activities.  Should this happen, the region above our atmosphere could become unusable for generations. The idea is that the extensive number of things we launch into low earth orbit (LEO), could create such a dense environment, that an inevitable collision could create a cascading effect, with each collision adding to the growing crescendo.  Kessler proposed that with enough collisions, debris could overwhelm the LEO region entirely, bringing any plans for NewSpace to its knees.

As one example, during the Cold War in 1965 – 1967, hundreds of thousands of tiny needles were fired into space by the US as part of Project West Ford (Project Needles).  Concerned about the susceptibility of US communications cables being cut by the Soviets, the tiny needles, almost the size of a postage stamp were launched into LEO space.  The intent was to facilitate stable communications in the ionosphere. Communications in this reflective region are not always stable as short-wave radio operators can attest. The needle length was half the wavelength of the 8 GHz signal being tested.  Over time, the needles clumped together, and today, 50 years later, there are about 38 clumps of high projectile objects whizzing around waiting to run into something.  Other objects competing for space, include dead satellites, lost equipment, boosters, and even anti-satellite weapons.

Added to man-made debris, that ranges from tools to paint chips, are millions of micrometeoroids – but they don’t present the same risk as the larger man-made debris.  NASA calculates that a 1-centimeter fleck of paint traveling at 10 km/s (22,000 mph) can inflict the same damage as a 550-pound object traveling at 97 km/h (60 miles per hour).   A 10-centimeter object traveling at those speeds, inflicts the force of 7 kilograms of TNT.  The thought of thousands of such objects dashing around and crashing into each other at high velocity is not a comforting one.

The growing consensus is that if this Kessler Syndrome event occurred, the entire space program could be in jeopardy.  While rockets could pass through affected space, and complete missions far outside Earth’s atmosphere, plans for constellations of LEO broadband, tracking and imaging satellites, not to mention space labs and other research platforms, could be grounded.  Many services that humans have come to rely on such as GPS, military and scientific research would be threatened.

In the 1970s some Delta rockets left in orbit started to explode into shrapnel clouds.  While this was on a small scale, it was what inspired astrophysicist, Kessler to describe that point when there is enough debris in orbit that it can achieve “critical mass” leading to a cascading collision, even if nothing else were to be launched into space. His technique was based on calculations predicting the actions of particles in a closed container, but it carried over to the classical world of space junk.  The concern, of course, is that once the explosions and collisions start, they can keep going until the LEO orbital space can no longer be used.

Another incident in 2009 referred to as the Cosmos-Iridium collision, produced 2,000 pieces of large space junk, when the Russian and US satellites produced a massive field of debris, launching off accusations and counter-accusations about who was responsible.  The main problem, then as now, was the lack of rules and agreements in place to address congestion in what formerly seemed like vast and empty space.  It was a real wake-up call, but did it come in time?

Some experts at NASA already suggest that we are already at critical mass in the low-Earth orbital zone 900 – 1000 kilometers (560 – 620 miles) over our heads.  According to estimates, there are currently about 500,000 pieces of assorted space debris up to 10 cm long, more than 21,000 pieces longer than that.  As for space debris smaller than 1centimeter, estimates range to more than 100 million pieces.  One frightening prospect raised by Kessler, is that a cascade might not be obvious, until it was well under way, a process that could take years.  Though unlikely, it’s conceivable that this has already begun. 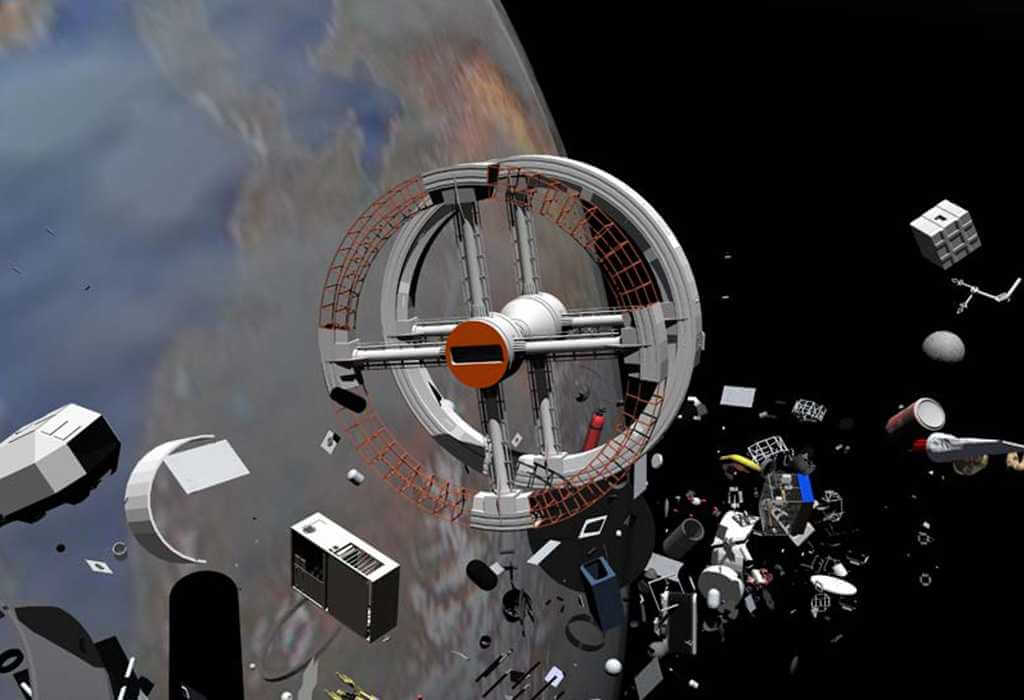 In 2011 a report by the U.S. National Research Council warned that the amount of orbiting space debris had reached a critical level.  Computer models were showing that the amount of space debris “has reached a tipping point, with enough currently in orbit to continually collide and create even more debris, raising the risk of spacecraft failures”. The NRC report stressed the need for international regulations limiting debris and increased research of disposal methods

NASA’s Space Debris Elimination (SpaDE) program is investigating the possibility of firing pulses of atmospheric gasses in front of targeted debris, slowing their speed, and increasing the rate at which the debris deorbits and falls back to Earth, generally burning up in the atmosphere.