Software-defined WAN as a Service

SD-WAN is the next generation enterprise connectivity technology that replaces traditional private circuits at an increasing pace. As business applications are moving to clouds, clients now require broadband access to all their data sources. BusinessCom addresses these requirements with SD-WAN over Satellite solution that provides up to 90% savings, compared to traditional VSAT and MPLS circuits.

BusinessCom® SD-WAN over Satellite services provide optimized broadband connectivity between your branches worldwide and your headquarters and cloud service providers, such as Amazon, Microsoft and others. The connection allows to mix satellite connectivity with third party terrestrial links, including MPLS, cable, DSL, LTE and others. 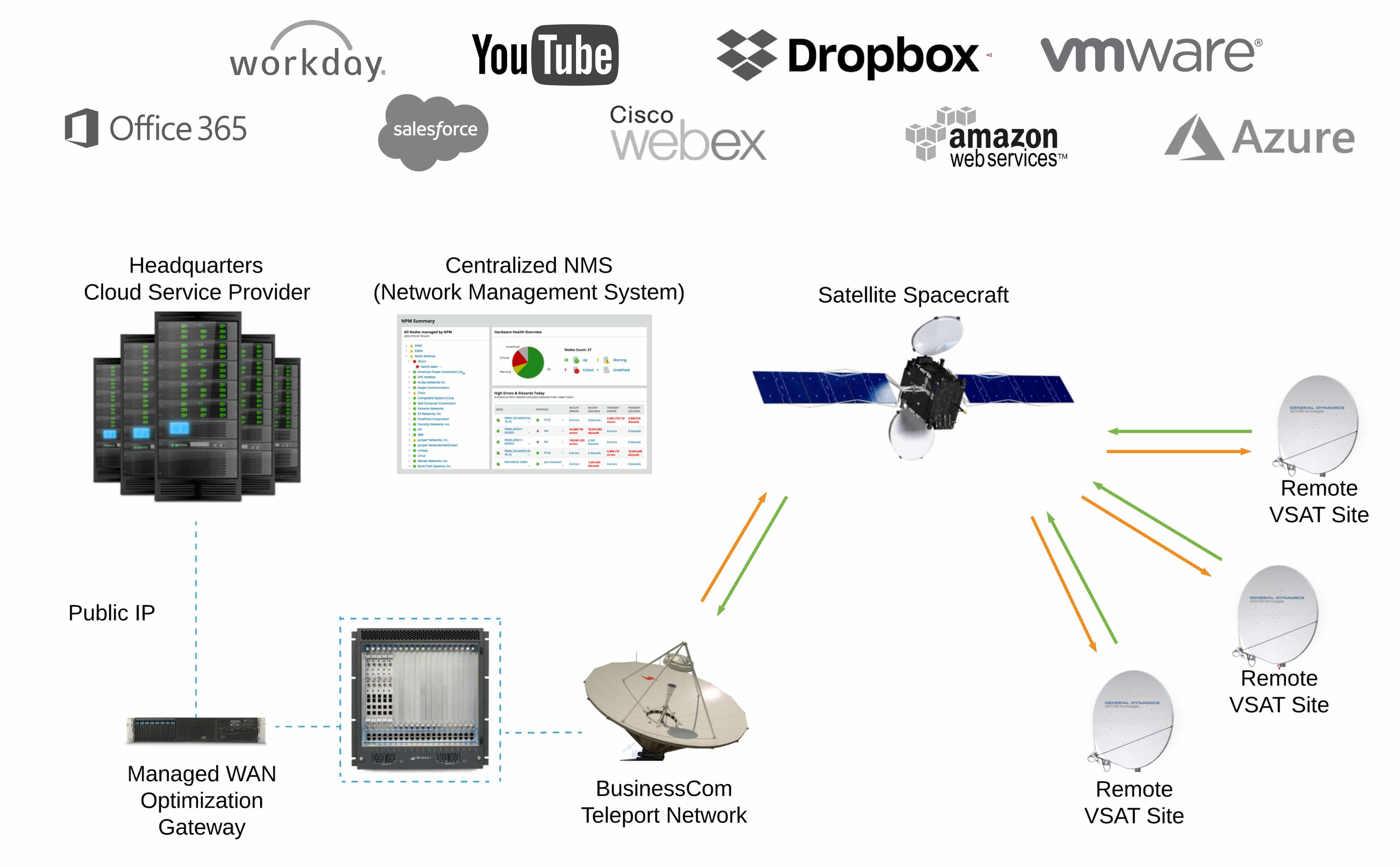 BusinessCom SD-WAN solutions are easily deployed over traditional BusinessCom VSAT connectivity services, such as iDirect, DVB-S2/ACM, SCPC and others. Secondary connections can be incorporated at all branch terminals, providing dynamic path control capabilities with automatic fail-over due to brownouts and outages. All user data is 256-bit AES-encrypted, providing secure end-to-end connectivity, all without any additional appliances.

The key features of BusinessCom® SD-WAN solution are:

A key advantage of SD-WAN over traditional rigid MPLS extension is the ability to have direct access to cloud providers and third party data centers. Rather than routing all the traffic via a private circuit to headquarters, BusinessCom SD-WAN solution automatically establishes direct cost-effective connectivity to clouds, ensuring the fastest path to your applications and data. This includes, for example, SalesForce, DropBox, Microsoft Office, SAP, Siebel, Oracle, and general services, such as Voice over IP.

Your existing terrestrial or VSAT connectivity can be transitioned to BusinessCom SD-WAN solutions seamlessly. When you need to upgrade current capacity or improve quality of service at remote branches, consider migrating to BusinessCom SD-WAN. Start by initiating a migration process to transition your connectivity to one of the BusinessCom VSAT services with as much equipment re-use as possible, and proceed with non-critical cloud applications. Existing IP connections of any type can also be augmented instead of replaced with full transparency and control.

In addition to overcoming performance issues associated with traditional VPN over satellite, there are numerous other reasons to choose BusinessCom® SD-WAN for your branch connectivity worldwide:

Many clients come to us with no real idea about how much bandwidth, or what kind of bandwidth, that…

In March 2019 we introduced OneWeb to this blog, see: OneWeb Takes Flight. OneWeb is one of the leading…

While the satellite industry is all abuzz with “NewSpace,” down here on earth, the buzz is “5G.”…

The Iridium satellite constellation, conceived in the early 1990s, was designed to support high Earth…

On March 12, 2018 at the Satellite 2018 Show at the Washington, DC Convention Center, Isotropic Systems…