SuperTower Replaces Traditional Cell Towers at a Fraction of the Cost

In September 2018 we discussed Google X project Loon, a HAPS, or High-Altitude Platform System based on inflatable balloon technology, delivering connectivity to difficult to service regions. Project Loon provides a solution similar in many ways to that of satellite, by positioning the platform high in the stratosphere where it can provide services to the ground below. There are many challenges with this solution given that it must deal with changing weather patterns and be programmed to rise or fall in order to leverage wind currents that hopefully keep it over the target area. Similar platforms based on blimp or airplane technology use solar panels to power the electronics, and drive propellers that keep the HAPS properly positioned.

Altaeros, is taking this concept and bringing it closer to earth. Its goals are not as lofty, but its ability to offer a reliable solution at a low cost is quite interesting. Taking note of the many rural communities that support half the world’s population that still do not have internet access, Altaeros understands as do many providers, that it’s too expensive and difficult to build out networks over wide expanses of territory with few subscribers. High speed fiber optic cables and 180-foot cell towers are very expensive, and difficult terrain adds to the challenge. The Altaeros SuperTower is designed to address this problem. The SuperTower deploys various types of wireless radios and antennas up to 800 feet above the ground. Because of the greater height, a SuperTower can replace as many as 15 smaller cell towers and do so at 60% lower cost. This solution has the potential to turn rural networks into a growth industry for wireless providers.

A major cost factor for typical HAPS platforms is the personnel cost involved in launching, monitoring, controlling and maintaining the platform. The SuperTower is designed to work with minimal human intervention. Manual operation for the Altaeros SuperTower would require approximately 10 people to operate tethers and winches needed to deploy the SuperTower, keep it at the right altitude and point it in the right direction. To reduce these costs, which would account for as much as 70% of the operating budget, Altaeros put their energy into an autonomous blimp. Using advanced model design software, the engineers developed key technologies including a detailed computer model of the system, and control software to manage it.

Using these tools, the team was able to model various situations, such as how the blimp would perform in high winds, and what would happen if one of the tethers that connects it to the ground were to break, or if one of the motors on a winch were to fail. By installing sensors on the ship, they will be able to refine the models and test them against real life operation and thus make continuing improvements. The result is that aside from occasional maintenance, the sites can be unmanned.

Unlike most other HAPS platforms, SuperTower is tethered to the ground. Three load-bearing tethers connect the helium filled blimp to a ground station. The tethers also pass fiber optic cable and power up to the blimp. The ground station will spin a full 360 degrees, allowing the SuperTower to face in any direction. A secondary conductive path provides lightning protection to protect sensitive wireless equipment. In a severe storm, the system can dock itself and then relaunch when the storm passes. Should any tears occur, sensors will command the blimp to dock and to notify an operator. Should a tether break, the other two will reel in the blimp. Should all three tethers break – a highly unlikely scenario, the sensors will tell the blimp to release helium and descend slowly to the ground. Operating SuperTower does not require any crew for normal operation. It is expected that down time due to weather conditions will be very infrequent. Personnel will visit the site from time to time for routine maintenance. Any standard telecommunications equipment such as 3G, 4G, 5G or fixed wireless networks will be supported. 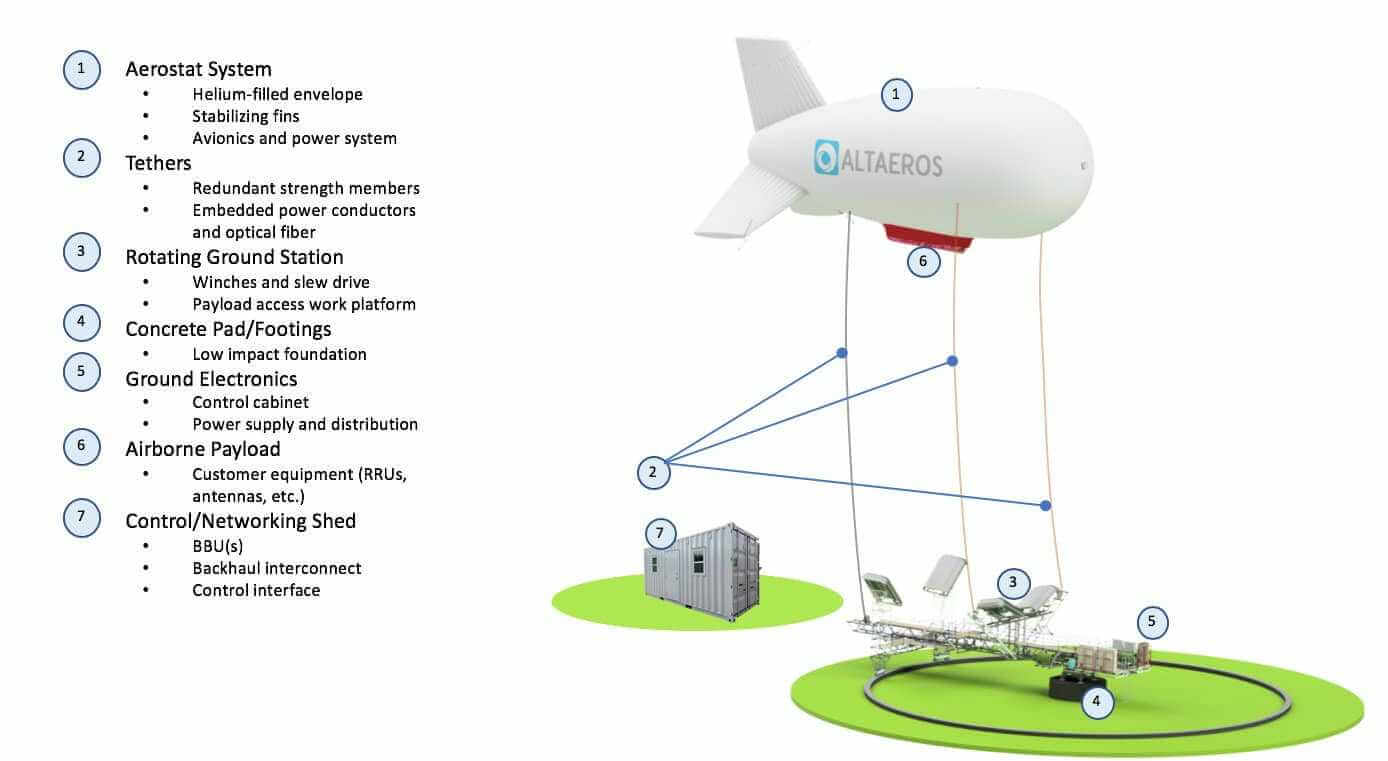 In 2016 and 2017 Altaeros ran pilot tests of the system using 43-foot and 50-foot prototypes. Equipped with Ericsson radio receivers and antennas the blimps were launched 500 feet into the air and began operating with 4G LTE signals. The system performed well with no degradation of signal or dropped calls due to the SuperTower’s motion. Because the blimps were so high, the radio frequency propagation was excellent according to the company. At this height, achieving line-of-sight to a SuperTower from subscribers within a large area is possible.

The primary challenge has to do with the newness of the product. There are still some operational and regulatory issues that must be addressed. Because the system requires maintenance from time to time, it will have to be reeled down and docked, which means a loss of service during this period. The company expects that these events can be scheduled for late at night when there is little traffic. The alternative being no service at all, this penalty seems reasonable. Altaeros notes that weather severe enough to damage the blimp may also damage cell towers and claims a SuperTower can be repaired and placed back into service far more quickly than a damaged cell tower.

On the regulatory side, the system, designed to fly as high as 800 feet, will have to meet the same FAA standards imposed on tall buildings. Permits will be required from state and county regulators and of course there are always the NIMBYs (not in my back yard), who may not want to view a blimp overhead. Altaeros anticipates that once the permit process is streamlined, expansion can take place quickly.

In the US, and other countries, the demand for delivering broadband to rural communities is growing in priority. Altaeros’ timing may be very good. The SuperTower will still require backhaul to the internet or cell provider’s point of presence. In very rural areas without fiber or microwave access, a MicroGEO satellite, such as those discussed in earlier articles here, may be just the ticket to provide coverage to rural areas where it was not economical to do so in the past.