On March 12, 2018 at the Satellite 2018 Show at the Washington, DC Convention Center, Isotropic Systems announced that they intended to become a contender in the emerging flat panel antenna (FPA) market.

We’ve written here previously about developments in the FPA market and the various technologies used by the vendors to bring flat panel antennas into widespread use.  The first players, such as Phasor, Kymeta and ThinKom are starting out with a focus that is primarily on the higher end mobile COTM (Communications on the Move) market, such as air, train, and maritime deployments, where they compete more favorably with motor driven Gimbal antennas using a parabolic dish.  Gimbal antennas are higher profile, requiring more space and generally creating more wind resistance.  They have more moving parts, and thus may require more maintenance.  For the time being, the leading FPA vendors do not appear to have their focus fixed on the enterprise and consumer broadband markets, but another entrant clearly does… 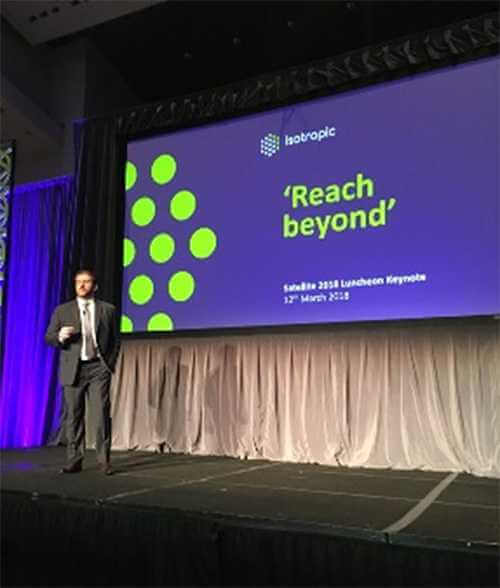 Enter Isotropic Systems.  As a keynote presenter at the Satellite 2018 show, John Finney the founder of Isotropic Systems laid out the business plan for their new flat panel terminal – and it is referred to as a terminal rather than antenna for a reason.  Finney suggests that there is potential within the satellite industry for the same explosive growth experienced by the mobile phone market.  He points out that there were several things contributing to the explosive growth of that industry and notes items such as reducing the cost of support infrastructure, payment models such as pre-pay, but most of all, terminal economics.  Bringing down the cost of mobile phones helped drive the growth of the mobile phone industry.

Isotropic suggests that the satellite industry is following a similar path, that includes “four corners of innovation: capacity, delivery, efficiency and distribution.  The satellite industry is still operating at the top of the market pyramid.  Broadband satellite customers today have a strong operational need, and a certain level of income – yet there are still over 50% of potential customers worldwide at the bottom of the pyramid, who are not connected. Many of these potential customers come from emerging markets in about 20 countries. Given the limitations of local infrastructure, satellite is the primary means for filling these gaps.  Finney sees a market of hundreds of millions of consumer broadband clients; a market that will be here for the long term.

Looking at mobile markets, he uses the example of the highly visible “super yacht” market which accounts for a miniscule amount of the overall maritime market, with untold numbers of vessels of all sizes that could be candidates for affordable broadband satellite services.  He speaks as well of the aeronautical industry, which is growing rapidly, but looking closely, one sees that this market has barely been penetrated, with most services available, on long premium routes, while countless other flights, such as short routes with less affluent passengers, go without service.

Finney suggests that the consumer market, aeronautical and maritime markets, among others, presents a huge opportunity, but how will we get there?  The conditions to make this work include lower launch costs, which are being driven by companies such as SpaceX, with one reliable launch after the other, raising confidence and the bar for success.  Next is the increase in capacity, which HTS satellites are delivering at ever faster rates.  These satellites are providing high throughput spot beams, capacity reuse and higher frequencies (such as Ka band), all the while reducing the cost of infrastructure.

The problem, according to Finney, is that while satellite delivery, capacity and efficiency goals are all being met by HTS, there is one of the four corners of innovation that has not caught up. Just like the hurdle the mobile phone industry had to overcome, it’s the terminal that is the sticking point today. Phased Array and other flat panel antennas today are expensive. Further, they all focus on single satellite connections, whereas Isotropic Systems, sees a demand for multi-satellite access, even at the base of the market pyramid – the consumer broadband market.  One problem with antennas that track multiple satellites is that they draw a great deal of power, and of course the more remote the region one is marketing into, the greater the challenge in delivering the power needed to track multiple satellites, whether they be GEO, MEO or LEO.  According to Finney, the current efficiency of radio performance is quite poor, which means much of the design and development enhancements for HTS satellites, is going to provide power for poorly performing, inefficient terminals.

Finney sees a new world in the decade ahead, in which we have multiple satellites, in high, medium and low orbits, along with ground stations that need low power, the ability to support huge amounts of instantaneous bandwidth, and the ability to seamlessly work with multiple satellites.  These terminals need to handle high bandwidth and give service providers great flexibility to attract new customers with new capabilities; unleashing a torrent of new features and offers. The challenge then, is to develop new terminals that meet these requirements.

Isotropic Systems began its research by noting the simplicity and high efficiency of the legacy parabolic antenna with its geometric structure focusing its energy into a single feed source.  Between the geometric structure, the parabolic reflector, and the feed source, there is only air, creating a simple and highly efficient system.  These antennas cannot scan, however.  When it comes to scanning, Finney says we must go to “brute force,” and all current FPAs and Phased Array antennas, require a huge amount of circuitry and electronics, simply to produce one beam in one given direction.  This requires enormous power, and the result is high cost and poor radio efficiency, but they do work. They can scan; so Isotropic Systems proposes taking the best of both legacy and new FPA technology to make the best of both worlds.

With three years of research under their belts, Isotropic Systems has developed beam forming optics that essentially work like a parabolic antenna, insofar as a beam’s energy is directed to a single feed source, going passively through air, like a parabolic antenna.  With no need to go through metamaterials or dispersive materials, as are being used on some FPAs, aberrations and losses are avoided prior to processing the signal. At the bottom of the structure are multiple beam-forming sources, each of which can support a beam.  Those not in use are switched off saving power.  Finney claims that this method reduces the power requirements as compared with current FPAs and Phased Array antennas by as much as 80%.  Current FPAs and Phased Array antennas, have thousands of individual feed sources, while Isotropic Systems needs only one feed source per beam in a given direction.  A key advantage of this approach is that it reduces the part component count by an astounding 70%.

The design is flexible so that if the scanning range is reduced, the electronics can be reduced.  For example, imagine a fixed antenna in central Africa scanning across the equator, versus an aircraft at the poles, which needs a greatly increased “look angle” to see satellites at the equator. There is no need to include the electronics to support the scanning range required by the aircraft (up to70 degrees), if a fixed site has a much smaller range to scan. The product can be configured to include only the electronics needed to support a given application, which will reduce costs for terminals that have less demanding needs.

Regarding consumer broadband, Finney makes a bold claim that the ability to reduce the expensive components used for feeds, can reduce the costs of terminals into the hundreds of dollars.  As an example, for a Ku system, he suggests that a typical phased array antenna will require about 2000 feeds, while their terminal will need about 30, resulting in significant power and component savings. The final product is an integrated solution that includes modem, BUC and LNB components in a single package (with option for connection to standard external BUC/LNB/modem components).  The solution is being engineered for Ku and Ka band terminals.  Because the solution avoids the limitations of phase shifters, it will be able to handle GHz of instantaneous bandwidth, ensuring that the terminal is never the bottleneck and supporting any commercial carrier size currently available.  The product’s modular design allows them to be combined in form fitting domes, suitable for airplanes and similar applications.

Believing that in the future, integrated terminals rather than antennas will become the market choice, Isotropic Systems has developed a modular product that will differentiate itself right from the start, by producing its terminals to be capable of supporting two beams by default.  These might be used for redundancy, least cost routing, load-sharing, link aggregation, or whatever applications service providers might come up with.  In addition to integrated BUC/LNB components, Isotropic Systems intends to partner with modem vendors. They started with iDirect who is providing a modem on a card, as an option for one of the two modem bays.  A terminal could have two modems from two different vendors; one perhaps an iDirect modem providing a shared service on a fixed HTS satellite, the other a dedicated service on a MEO satellite….  The idea is that in time, VSAT modems will become like SIM cards that slip into your phone.

Isotropic Systems has come up with some bold claims.  Their solution is multi-beam, multi-vendor.  It has no single point of failure and delivers huge amounts of instantaneous bandwidth.  They expect to achieve an extremely low price point due to reductions in power and components.  They have strong partners in SES, Inmarsat, and at the show they announced an agreement with OneWeb for a consumer broadband terminal for their new network.  This may be a company to keep an eye on.