The growth in the number of small satellites in LEO (Low Earth Orbit) is expanding quickly. Iridium, for example, recently launched ten new satellites, raising the count to 65. Their NEXT satellites will provide satellite phone and broadband communications around the world.  SpaceX is scheduled to launch as many as 70 satellites at once, from 35 different organizations, in the next few months. How will all these new satellites communicate, in some cases with each other, and with earth stations on the ground?

Satellite communications historically, has consisted largely of satellite – earth connections, from a GEO (Geosynchronous Earth Orbit) satellite fixed in place high above the equator.  With the growing numbers of LEO satellites, there comes a need for more satellite-to-satellite communications.  A GEO satellite will typically have a large footprint or cover several regions in which one or more earth stations will be located.  Traffic from remote sites on the ground are relayed to the earth station.

Historically satellite communications have been conducted using RF (Radio Frequency) beams.  For a GEO satellite, RF is perfect since it can be groomed to cover various regions.  For satellite to satellite communications, RF is too wide, too dispersed, and would create interference with other satellites.  If one satellite transmits to another using RF, that signal may be received by another LEO satellite some distance away, but in the line of the beam.  That becomes an interference issue, particularly when there are hundreds or thousands of LEO satellites in proximity to each other.  For this reason, Laser communications are being tested, as an alternative to RF.   Laser communications are done over a tight, narrow beam that can be directed exactly to a target.  They have the further advantage of being designed so that they cannot be intercepted without breaking the link. There are several challenges, including size, weight, power, and complexity.  Fast moving satellites will need to lock on and track each other or earth stations on the ground, to maintain high speed connections.

The AeroCube-7B and Aerocube-7C demonstrated data transmission at 100 Mbps, a rate that is 50 times faster than CubeSats are generally capable of.  High speed laser communications testing up till now has been on larger satellites, and given the rapid proliferation of small satellites, this is significant.  This was a first for space-to-ground optical communications by a free-flying CubeSat.  The new system is smaller, lighter, and offers higher data rates and improved security, as compared with RF systems used by practically all satellites today. 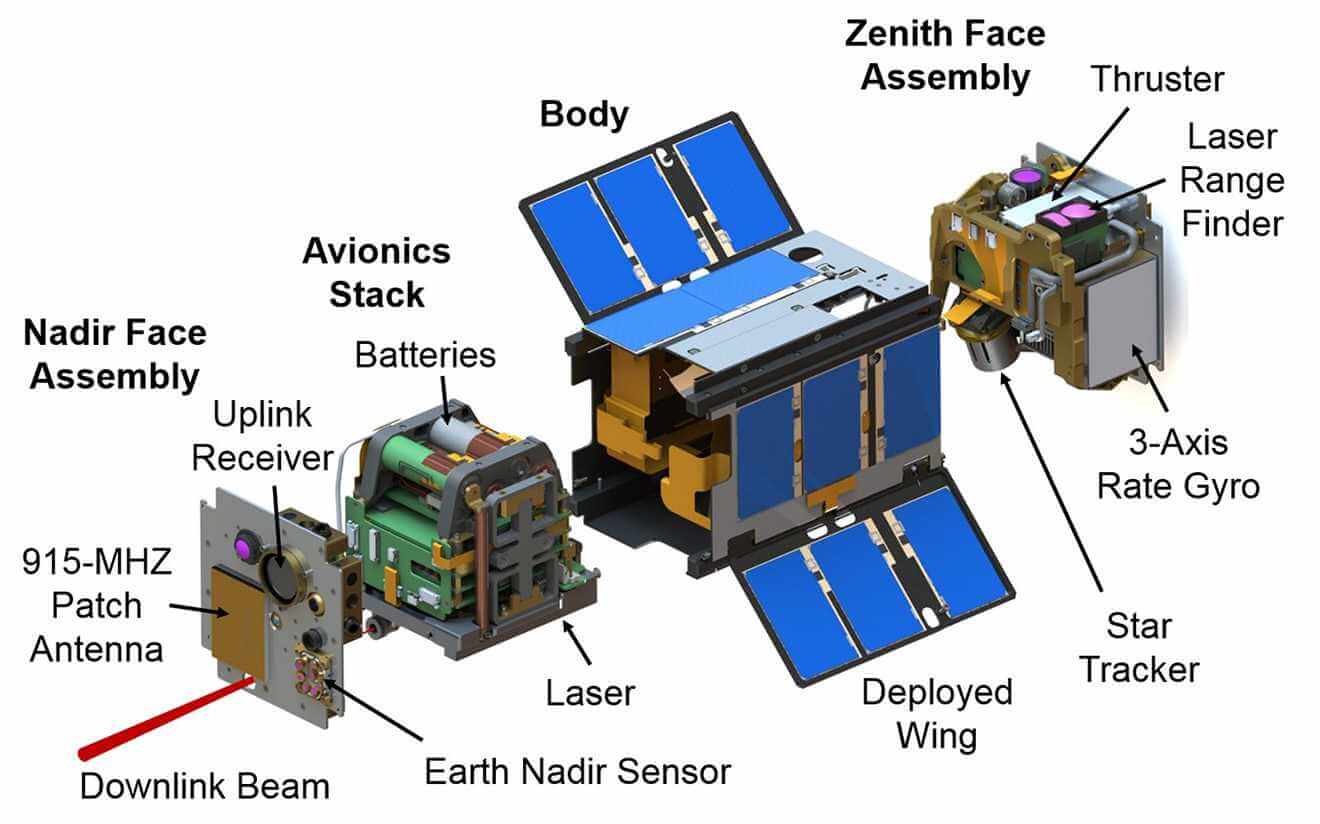 The OCSD lasers are hard-mounted to the satellite, which means pointing the laser requires that the entire satellite rotate, but this approach eliminates complex beam steering mirrors.  A highly accurate control system points the satellite while downloading data. Tiny star trackers, which use stars for orientation and navigation, enable the satellite to point with an accuracy of 0.025 degrees.  This altitude control system is forty times more accurate than what was previously possible for such a small satellite.

Aerospace, a non-profit corporation, operates a research and development center for the US Air Force.  Their two AeroCubes were launched on Nov. 12, 2017 as part of a payload for the International Space Station.  They were deployed shortly afterwards, on Dec. 6, 2017.  In addition to the laser communications system, the team is also doing proximity demonstrations, bringing the satellites within 20 feet of each other.  They are also testing a novel propulsion system based on non-flammable, non-toxic water.