What Is High Throughput Satellite (HTS) Internet & What Is Special About It?

As longtime space technology companies and newcomers to the industry such as Google, Facebook and SpaceX scheme of ways to capture the satellite Internet market, the emergence of High Throughput Satellite (HTS) technology has raised the stakes. HTS, as the name suggests, offers many times the throughput of the traditional Fixed Satellite Service(FSS) using the same amount of allocated orbit space. This is accomplished by taking advantage of frequency reuse and spot beams. By doing so, the cost per bit delivered is reduced, regardless of spectrum choice.

There are 4 core components to consider in the development of an High Throughput Satellite (HTS) Internet system:

Throughput consists of bandwidth, measured by megahertz (MHz). It is the overall size of the allocated satellite resource.

Efficiency speaks to the utilization of spot beams. Spot beams drive efficiency up, but too many spot beams close together can result in interference which drives efficiency down. Putting greater distance between beams increases efficiency, but reduces frequency reuse, resulting in lower overall satellite throughput. Improved efficiency will enable carrier-grade services and performance, allowing users to expand their addressable markets.

Coverage is the third component of HTS and addresses the desired coverage area. The number of spot beams is constrained by satellite spacecraft resources. The size of the beams depends on the frequency selected. The ability to combine wide and spot beams is an essential part of providing coverage where and when customers need it.

Spectrum is the final HTS internet component to consider. HTS can be developed in any frequency band, driven by considerations such as beam size, coverage, atmospheric conditions and ground technologies. 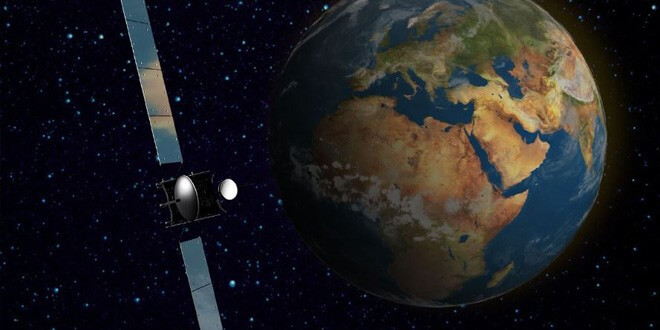 One of the major advantages of high throughput satellite internet (HTS) at the present time is cost. While Ku-band FSS bandwidth can cost well over $100 million per gigabit per second in space, HTS systems such as ViaSat-1 can supply a gigabit of throughput in space for less than $3 million. Because of the advent of HTS systems, network service providers can offer a new generation of communications solutions. HTS systems combine the exceptional spectrum efficiency and performance of spot-beam antennas with ultra-wideband transponders to enable unprecedented levels of bandwidth and throughput. Each spot beam reuses frequencies in multiple carriers so that a single HTS spacecraft can provide five to ten times the capacity of traditional satellites. For the customer, this provides the potential to dramatically increase data rates, upwards of 100 Mbps to a single site, and improve application performance compared to traditional satellite based communications.

High Throughput Satellite Internet – Is It Right For Your Business?

Despite the tremendous upside to HTS, there remains a significant amount of misunderstanding and confusion on how these new technologies can benefit the industry and its customers. Satellite fleet operators feed into the confusion, pitching their own technologies and applications in a biased manner. An objective look at these emerging technologies shows that there are benefits and trade-offs associated with the varied choices. Originally, most HTS systems were designed for mass markets and to operate in Ka-band where small antenna aperture antennas can provide narrow spot beams. However, satellite operators are now applying HTS technology and spot-beam antennas to new Ku-band spacecraft. As these HTS systems proliferate, operators of VSAT networks will have new technology choices when implementing solutions tailored to the application environment of their clients. HTS systems and capabilities can be leveraged in a variety of ways to extend the portfolio of satcom service offerings available on the market. What is clear is that VSAT networks will reap the benefits of having more options and enhanced technology in the delivery of satellite Internet services to their customers.