With the advent of a new generation of NGSO (Non-Geostationary Satellite Orbit) satellites going into design and development, new frequency bands for these satellites are also being studied.  GEO satellites today, typically use C band (4 to 8 GHz), Ku band (12 to 18 GHz), and Ka band (27 to 40 GHz) to deliver services.  From their position high above the equator, they deliver services to various sized regions on earth, ranging from hemisphere to region to country to state-sized spot beams.  MEO and LEO satellites, operating closer to the ground, will have even smaller, tighter beams and will use higher frequencies that will need to be made available to support growing capacity demands, if these new ventures are to be successful. 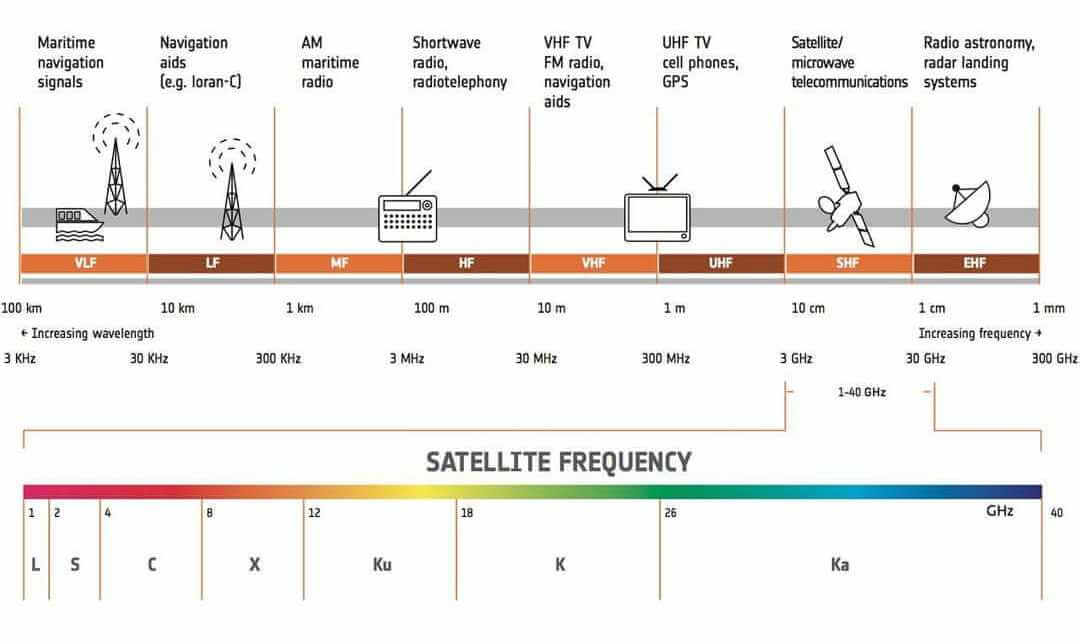 New constellations for LEO (Low Earth Orbit) satellites are being announced in rapid succession with proposals for new telecommunications satellites numbering in the hundreds, such as OneWeb, or thousands, such as SpaceX Starlink.  As the number of potential services increases, demands will increase for RF spectrum in space, just as they are on earth for proposed 5G networks.  Higher frequencies will be used in both cases to deliver higher data rates.  Both technologies will use small, tight beams, allowing the frequencies can be used repeatedly without interference.

Finland’s Reaktor Space Lab and VTT Technical Research Centre are participating in a European Space Agency (ESA) project.  A nanosatellite is being constructed that will help investigate a new frequency band for these next-generation satellites. The project is being funded by the ESA in conjunction with its ARTES programme (Advanced Research in Telecommunications Systems).  They plan to test and demonstrate W band spectrum which ranges from 75 to 110 GHz, sitting above V band (40-75 GHz) which is also of interest to next generation providers.

W band offers high data rate throughput for high altitude platforms (HAPs) and space communications. The International Telecommunication Union (ITU) allocated the 71-76 GHZ and 81 – 86 GHz segments of W band to satellite services.  Although there are no commercial projects that have been implemented, the spectrum is of increasing interest to commercial satellite operators.

To carry out the test, a Finnish made CubeSat will be launched.  This is a small, cost-effective platform that weighs less than 5 kg.  The platform will support a radio that will broadcast at the frequencies they wish to test.  It must be demonstrated that these high frequencies will operate through earth’s atmospheric layers reliably and consistently, so that next-generation satellites can be developed to use these high frequencies and support desired features.  LEO satellites operate in and around the electrically charged ionosphere which can be challenging for satellites, hence the need for further testing. The current plan is to launch the satellite during 2019.

Reaktor Space Lab offers mission design, satellite design, manufacturing, testing and operations.  Later this summer it expects to launch its first commercially built nanosatellite, “Hello World.” This satellite follows Aalto-1 and 2 which were designed in part by Aalto University students in the School of Electrical Engineering.  These tested early nanosatellite designs. The “Hello World” satellite is scheduled to be launched on its first mission this summer (2018), and the same platform will be used in 2019 to conduct tests on W band.

The satellite, named the W-Cube will feature a VTT developed dual-frequency beacon transmitter. Prime contractor Joanneum Research will use its measurement station in Graz, Austria to observe the signal it broadcasts. VTT has been a leader in millimeter-wave satellite hardware development as well as 5G terrestrial radios. Let’s wish them luck.