A recent analysis by the Department of Aeronautics and Astronautics, Massachusetts Institute of Technology proclaims that Telesat LEO is the most efficient of the three leading contenders for delivering broadband satellite services. Technical aspects of the OneWeb, SpaceX and Telesat solutions were analyzed to determine the total system forward capacity – or sellable capacity – for each of the three systems.

LEO or Low Earth Orbit satellites have been in hot development for a few years now.  The idea is to place a constellation of satellites in low earth orbit, that provide high speed, low latency broadband connectivity for sites around the globe. There have been at least 11 proposals thus far.  The LEO fleets will be stationed from 1000 km (610 miles) above earth (Telesat), to 1200 km (OneWeb), to 1325 km (SpaceX) and will seamlessly integrate with terrestrial networks, delivering fiber quality Gbps links and very low latency (30 – 50 msec) around the globe. Conventional GEO (Geosynchronous Earth Orbit) satellites orbit about 35 times higher, and therefore, have much higher latency or delay – on the order of 1/3 second for each land-to-land connection over a satellite.  We will look at the basic design of each of these three leading pioneers and then compare what kind of throughput these designs produce.

Telesat’s service is entirely based on Ka band and will include a minimum of 117 satellites distributed in two sets of orbits.  Ka band will be delivered to users on the ground, and to the ground stations that provide a connection to the internet backbone.  A Polar Orbit consisting of 6 orbital planes, will provide global coverage, and will utilize 12 satellites per plane, or more.  An additional set of Inclined Orbits will provide at least 5 orbital planes that will focus on the global regions with the most population.

In the Telesat model, each satellite will be an IP node. This differs from most satellites, such as those in GEO orbits, which essentially have an RF “repeater” function.  The radio frequency comes up from the ground and is “repeated” to another frequency and sent back down.  In the Telesat model, the satellite is an IP router and can make routing decisions about where to send the traffic.  This provides a great deal more flexibility, but it also introduces complexity.  GEO satellites, often placed into service for 10-15 years, have no easy way to make router repairs, while shorter lived LEO satellites can be replaced as needed – or possibly repaired in space.  LEO satellites are generally intended to be replaced more frequently which will lead to more frequent technology refreshes, a challenge for the traditional GEO satellites far above.

With the ability to demodulate, route and re-modulate, the Telesat LEO satellites will be able to direct traffic to ground stations or to nearby satellites to forward, based on high-efficiency routing technology. 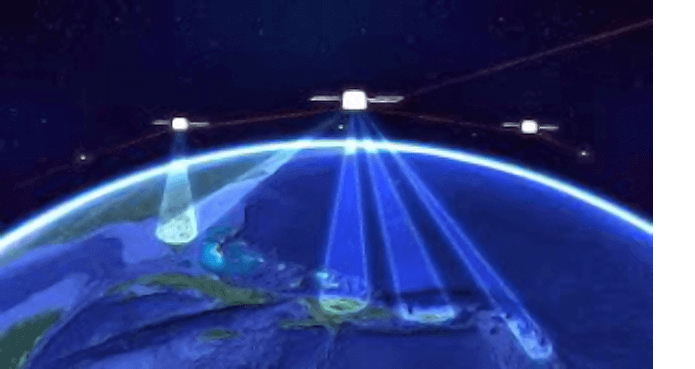 The satellite’s DRA or direct radiating array communications payload will employ beam-forming and beam-shaping for at least 16 beams on the uplink direction and at least another 16 in the downlink direction.  To minimize interference with both GSO (Geostationary Orbit) and NGSO (Non-Geostationary Orbit) satellites, the power, bandwidth, size, and boresight (center of aim), will be dynamically assigned per beam, to get as much performance, and as little interference with neighboring satellites as possible. In addition, the satellites will have not one, but two steerable Gateway antennas along with a wide FoV (Field of View) receiver beam for signaling.

To support broadband traffic, Telesat LEO has access to about 4 GHz of Ka-band spectrum.  They will leverage “frequency reuse,” to allow for greater than 10 THz of spectrum available on a global basis. Frequency reuse is a technique in which the same frequency is used repeatedly, but in footprints far enough away from each other to avoid interference.  The system will have Gateways distributed across the world, each of which will have multiple 3.5 m antennas. The entire network will be managed from the control center in Ottawa. 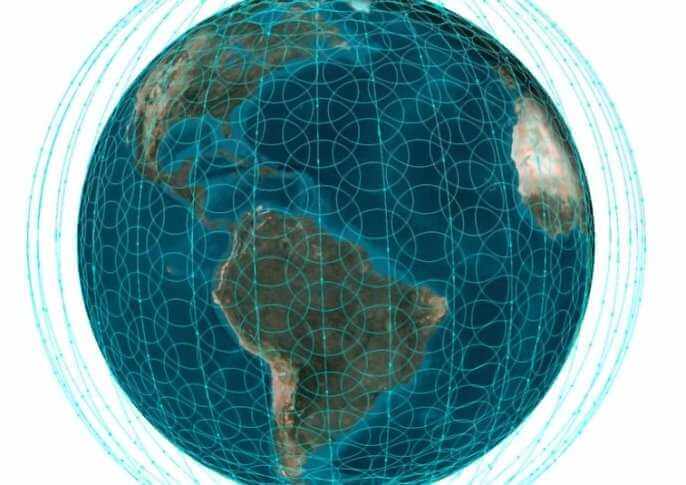 OneWeb will deploy a Ku and Ka band constellation of 720 satellites.  They will be in 18 circular polar orbits at 1200 km, with each plane inclined 87 degrees.  Unlike Telesat’s model, OneWeb will employ a traditional “bent-pipe” architecture.  That is, signals coming up from the ground, will be “repeated” to another beam going down, with no routing taking place. OneWeb will use Ku band for user connections and will map each Ku channel into a Ka channel for delivery to a Gateway.  There will be 16 identical beams. They are to be fixed, not steerable.  The user beams will be elongated and highly-elliptical.  With this design, any user will be within the FoV of at least one satellite, with an elevation angle greater than 55 degrees.   Additionally, there will two steerable Gateway beams, leveraging traditional gimble (mechanical) antennas.  One antenna will be active, while the other acts as backup and “handover” antenna. User channels will be divided with bandwidth of 125 MHz in the downlink direction and 250 MHz in the uplink direction.

OneWeb’s model requires 50 or more Gateway earth stations, each supporting as many as ten 2.4 m Gateway antennas.  A limitation of the OneWeb system is that services can only be offered in regions where both the user and the Gateway have a line-of-sight to the satellite, since there is no satellite to satellite linking.  This means ground station site selection will be critical.  The user will require a 30 – 75 cm parabolic dish, phased array, or other electronically steered antenna. 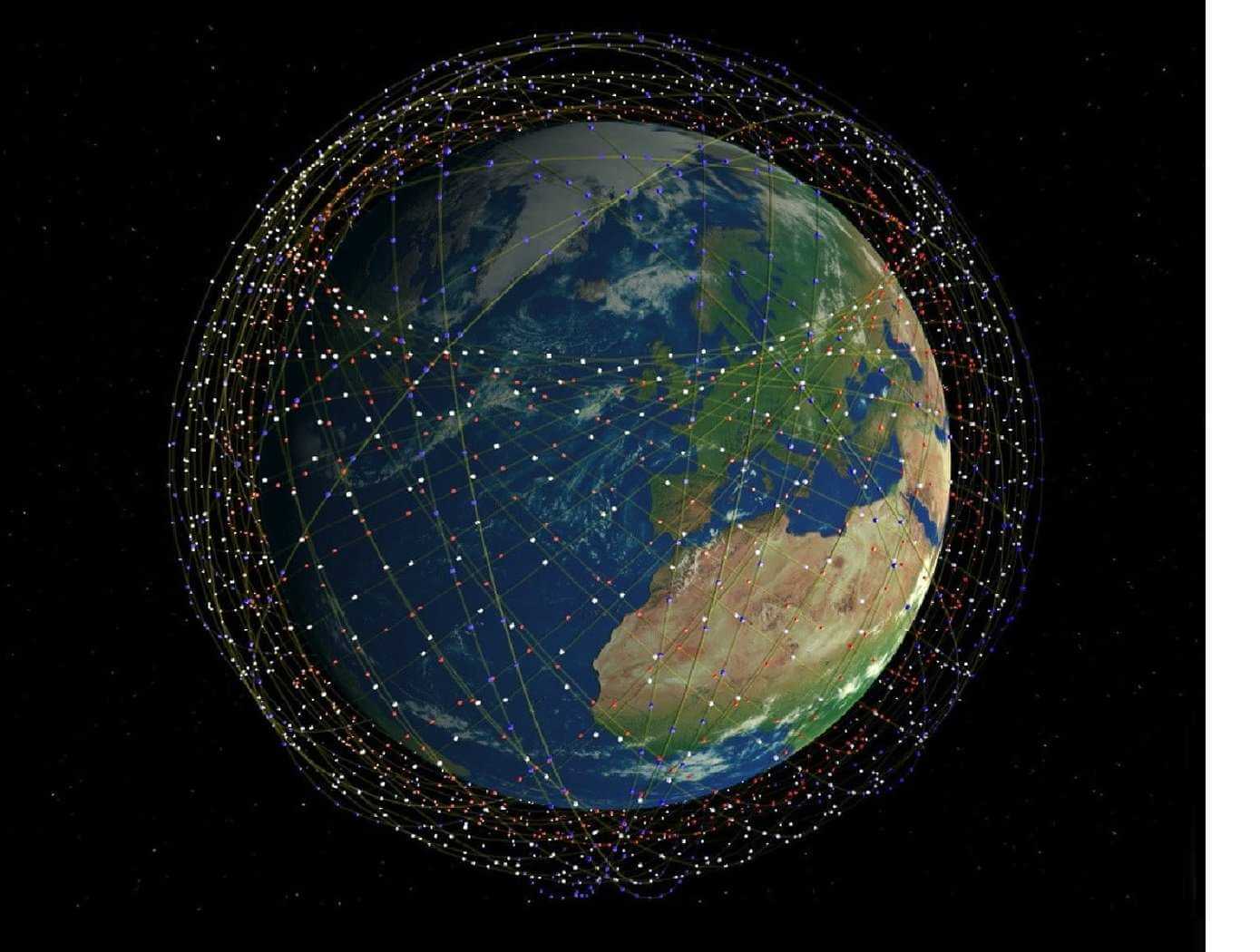 These satellites expected to deliver a total throughput of 17 – 23 Gbps each, will carry an on-board advanced phased array, allowing individually steered and shaped beams. The satellites will have ISL (inter-satellite links) designed to ensure continuous communication and support services over the oceans, while mitigating the effects of interference.

As can be seen in the chart, all three systems utilize circular orbits, all are in the 1000 – 1350 km range, however the orbital planes are quite different.  OneWeb relies on traditional polar orbital planes, while Telesat and SpaceX utilize multiple orbit-sets, with some planes in inclined orbits intended to provide coverage over more densely populated regions. Polar orbits are designed to provide global coverage.

These different configurations, along with the total number of satellites, result in a large difference in the average number of satellites in any given LoS (Line of Sight).  Telesat with the fewest satellites, will operate at lower elevation angles (20°) as compared with SpaceX at 40° and OneWeb at 55°.  While Telesat has far fewer satellites than OneWeb, it has more satellites in the LoS in the regions (+/- 60° latitudes) where most of the population is concentrated.  This is a result of the lower elevation angle for user links allowed in Telesat’s design.  OneWeb will have one satellite visible in this region, Telesat will have three, while SpaceX will have more than twenty.

Turning to frequency allocations, we see that OneWeb and SpaceX use Ku band for user links and Gateway links, while Telesat uses Ka for both, which means user and Gateway must share the Ka frequency. Telesat will dynamically allocate power and bandwidth for the user and Gateway beams to reduce the possibility of interference. 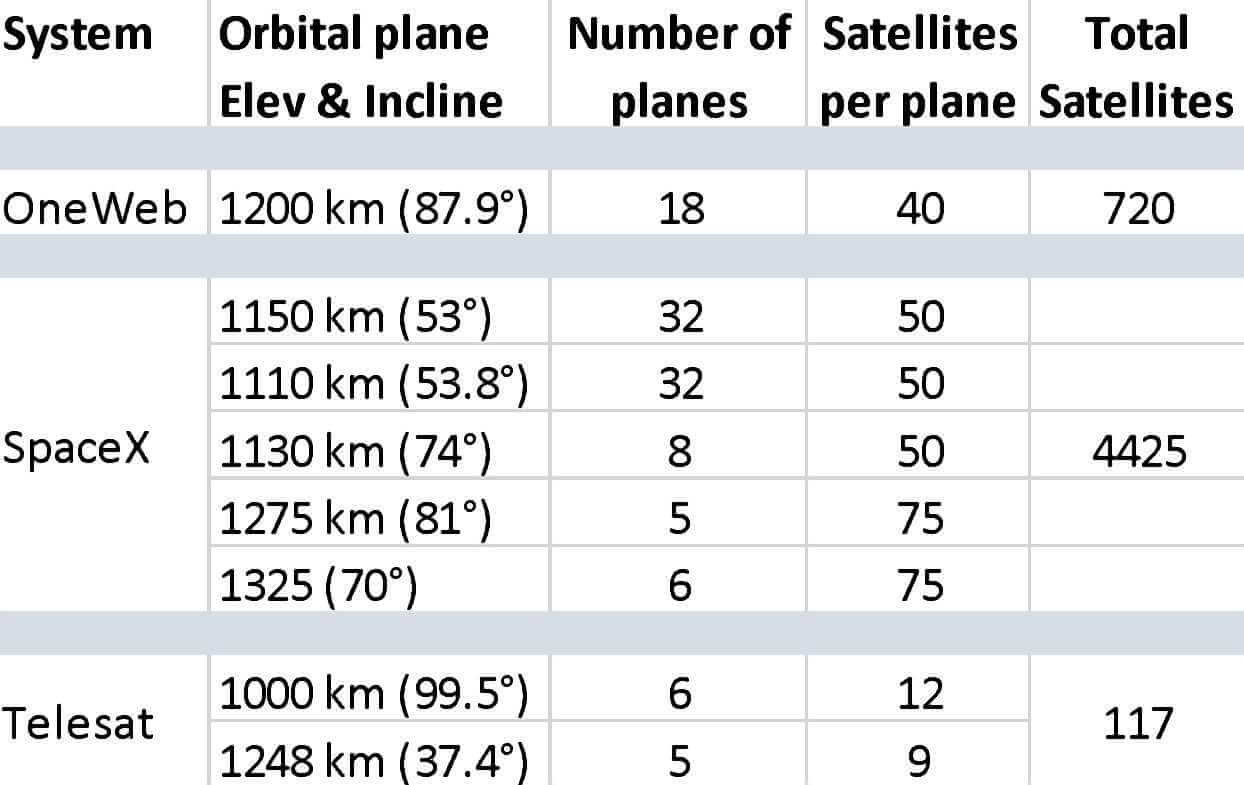 OneWeb’s bent-pipe architecture maps user Ku channels to Ka Gateway channels, while Telesat and SpaceX architectures can demodulate, route and re-modulate, effectively decoupling user and Gateway links.  This flexibility allows them to maximize the overall capacity of the satellites by using different spectral efficiencies in uplink and downlink channels.  They also dynamically allocate resources for the user beams and mitigate interference by selecting which frequency bands are used. It’s estimated that this will result in frequency reuse of 4 – 5 times for SpaceX user links and 4 times for Telesat’s user beams.

Another area of difference is beam characteristics.  SpaceX and Telesat have individually shapeable and steerable circular beams, while OneWeb uses elongated, highly elliptical fixed beams.  Each OneWeb beam covers an approximate surface area of 75,000 km², while SpaceX beams cover an area of about 2,800 km².  Telesat’s shapeable beams range in coverage from 960 to 246,0000 km².  Telesat can dynamically put up a very small beam in an area of high population density, and a much larger one in a rural or oceanic region with few users.

The MIT analysis goes into significant detail regarding the methodology used to determine performance levels for each of these vendors.  It incorporates a wide range of variables ranging from atmospheric models, link budgets, orbital dynamics, ground station locations, and genetic algorithms for ground segment optimization.  Based on this information, the study estimates average and maximum potential data-rates per satellite.

Average data rate estimates per satellite come out as follows:  Telesat 35.65 Gbps, OneWeb 8.8 Gbps, and SpaceX 20.12 Gbps.  Maximum data rates are estimated to be 38.68 Gbps for Telesat, 9.97 Gbps for OneWeb and 21.36 Gbps for SpaceX.  Telesat, recall, supports two Gateway links per satellite, and these figures are based on two active Gateway antennas, with one active Gateway antenna for OneWeb and SpaceX.  On a per/satellite basis, Telesat comes out way ahead, SpaceX next and OneWeb trailing behind. 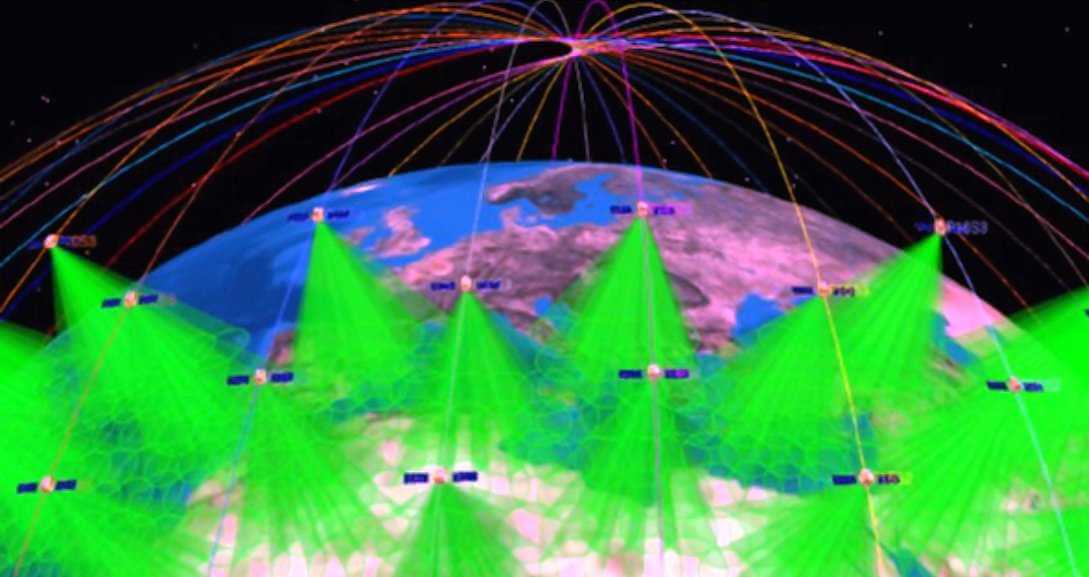 Telesat therefore is the most efficient system in terms of average throughput in Gbps per satellite, with four times that of SpaceX and ten times that of OneWeb.  The challenge for SpaceX will be the very large number of ground stations and Gateways in order to operate at full throughput.  OneWeb will be limited by the space segment, i.e. the user link data rates.  Telesat comes out ahead in terms of per satellite throughput due to a small number of high capacity satellites, low elevation angles for user links, the use of ISL to hand off traffic to another satellite and the use of two active Gateway antennas. SpaceX will need to procure a very large ground segment with hundreds of ground stations and somewhere around 3,500 Gateway antennas, in order to operate at maximum throughput. Had OneWeb instituted ISL inter-satellite links, even at moderate data rates of around 5 Gbps, they could have significantly reduced their ground segment requirements.

Other factors not mentioned include launch capabilities, but these do not affect the throughput discussion, although they do have an impact on the rate of deployment.  Telesat LEO has recently demonstrated connectivity with a maritime service provider on a Phase 1 LEO satellite. The test demonstrated latency as low as 16 msec and was based on a 1 m maritime Ka-band antenna. The test demonstrated video conferencing, and OTT (Over the Top) video such as YouTube, as well as massive data communications.  The next test will come from OneWeb whose first satellites have arrived in French Guiana and are scheduled to be launched on February 26, 2019.  It’s getting real, folks!

Representing a great opportunity for our industry, High Throughput Satellites…