Progress Towards a Reusable Booster

In November 2019 we commented on Rocket Lab’s successes in the emerging small rocket industry. To further reduce costs, Rocket Lab announced that, like SpaceX, they would work to recover their boosters and reuse them. See Rocket Lab Update. Unlike SpaceX, who uses fuel to slow the rockets and bring them down to land or a barge in the ocean, Rocket Lab’s plan is to decelerate the rocket with parachutes and then capture it with a helicopter and return it to a vessel or back to land. On April 8, 2020, a test was performed to study the viability of this plan.

Rocket Lab dropped an Electron first stage booster from a helicopter high over the ocean in New Zealand. The booster then deployed a parachute, after which a second helicopter closed in on the descending booster and captured it in mid-air some 5000 ft (1500 meters) above the ocean. A specially designed grappling hook captured the parachute’s drogue line on the first attempt, after which it was carried back to land and gently deposited. 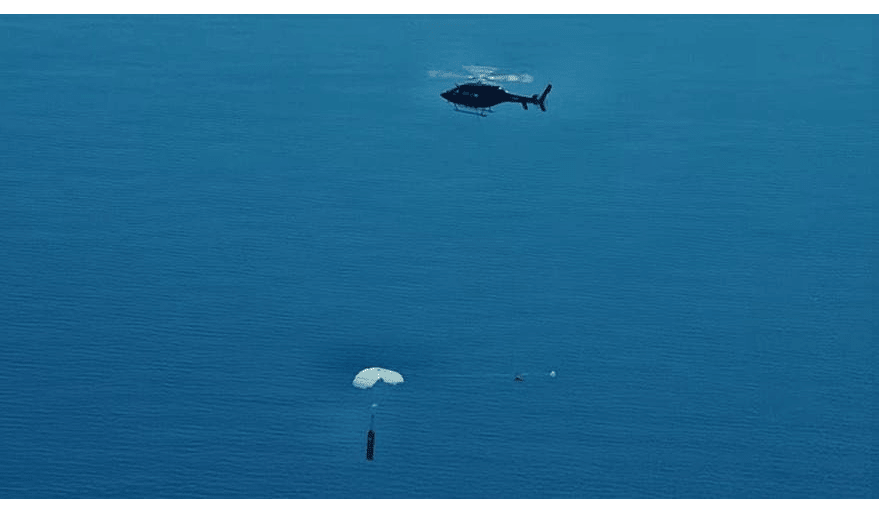 A helicopter uses a specially designed hook to snag the parachute attached to a replica of an Electron first stage, demonstrating a key step in Rocket Lab’s plans to recover and reuse the stage. Credit: Rocket Lab

The next test is expected to attempt a full recovery of the Electron first stage, and to then refurbish it. On this next test, a helicopter will not capture the first stage; instead, it will perform a soft landing in the ocean where it will be picked up by a ship and returned to land. If the pandemic sweeping the planet does not cause delays, this next phase of testing is planned for later this year (2020).