An application that continues to be of interest in broadband satellite services is VoIP (Voice over IP). While many people turn to Skype and similar voice or video applications to communicate with others on a variety of devices, standardized VoIP remains popular for those who want to make phone calls to the POTS or plain old telephone service. The POTS service, we grew up with delivers consistent, reliable, high quality communications. Businesses that rely on good telephone service need that quality to be extended to remote locations over satellite links. That is not as easy as it sounds, and it’s one reason that there is a perception among many people that satellite is not capable of supporting high quality voice communications. Note that not all broadband satellite technologies are created equal.

At BusinessCom we have been delivering iDirect-enabled broadband satellite services for about 15 years. Our flagship commercial service is “iDirect Broadband” with multiple footprints providing near global coverage. One of the reasons the service has been so successful is in leveraging the technology iDirect provides to support business class VoIP.

We’ll start by acknowledging that there is one thing we can’t do anything about, and that’s the latency, or delay. Satellites are 35,786 km (22,236 mi) above the equator, and the way the math works out, it’s about 1/3 second for each trip up to the satellite and back to the ground. This delay is something that speakers quickly get used to, and isn’t that much different than two users on cellphones talking with each other. As with cellphones, from time to time, people will speak over each other and have to adjust. As long as the quality is good, this is very seldom an issue.

What are the challenges?

Sending data over satellite networks is challenging enough, but voice (and video) communications come with a new set of challenges. In a VoIP call, the speaker’s voice is converted from analog to digital form. Voice is turned into 1s and 0s or bits that will be sent to a destination where they will be put back into analog form. VoIP in a typical office network is competing with users on the web, email, file transfers, Skype sessions, not to mention that all the bandwidth is being shared by a number of sites in different locations. How does one deliver voice traffic smoothly and consistently across what is really a very bursty and intermittent kind of network? Voice and video traffic are referred to as “real time” traffic as it must be delivered in real time.

The first tool is Application QoS or Quality of Service. iDirect’s Real Time Traffic Management (RTTM) has the ability in real time to identify, classify and prioritize data traffic including VoIP. The system recognizes VoIP packets and assigns them priority over other applications such as browsing or email, ensuring that they are not interfered with by other traffic.

When traffic is sent across the satellite network, data packets from the users and computers generating them are bundled up into packets and the packets are sent across the satellite link and then opened up on the other side. These packets can vary in size, up to 1500 bytes. If a large file transfer using the FTP protocol generates a packet of 1500 bytes, then even if the voice traffic is prioritized, it’s going to be held up behind the large packets from time to time. This will prevent the voice traffic from being delivered smoothly and evenly, so it will sound choppy and uneven to the listener.

SAR or Segmentation and Reassembly can be enabled to address this problem. It divides packets of varying sizes into equal sized pieces, so that voice packets can be “groomed” to equal the bandwidth of one timeslot or transmission time. The original packets, such as large FTP packets are reassembled on the other side and delivered as though they were always large packets.

Another critical tool for business quality VoIP, is the implementation of CIR or Committed Information Rate. This is bandwidth that is guaranteed. Note that some operators “oversubscribe” their CIR, such that it’s no longer really “committed,” and this is something to look out for if your voice quality is not consistent. For simplicity, BusinessCom Networks assigns CIR as a function of the sharing ratio, so a typical 2 Mbps x 512 Kbps Standard service, for example, provides bandwidth shared at 10:1 and consequently delivers 204.8 Kbps x 51.2 Kbps of CIR. A typical VoIP call, using standard compression will generally need 14 – 16 Kbps of CIR. The upload is the smaller circuit, so it determines the number of calls supported. 51 Kbps divided by 16 Kbps gives us support for three calls with excellent quality or perhaps four calls with slightly degraded quality. A larger upload will deliver more CIR, or a client may order Premium service, shared at 4:1, which will deliver much more CIR, and thus support more concurrent calls.

iDirect’s system allows CIR to be delivered to a site in different ways – for example it can be delivered when triggered by an application. The Hub would therefore recognize that a call was being placed from a particular site, and then assign CIR to that application for the duration of the call. When the call was completed, the CIR would go back into the shared pool. At BusinessCom the CIR to the site is always there, and we assign it to VoIP (or other critical applications) when a call is placed; otherwise it is available to be evenly distributed between users or assigned to something else with priority. There are a couple ways to do prioritize the voice, using the VoIP codec or phone’s address, or by protocol. Our engineers work with the client to understand the requirements, and propose the best option in each case.

Thus far, we’ve recognized and prioritized VoIP by the type of application. We’ve broken the big packets into smaller packets so voice traffic doesn’t get stuck behind it, and we’ve allocated CIR or guaranteed bandwidth to make sure it can be delivered without waiting. Another issue for all voice traffic is “jitter.” This condition occurs because data traffic is allocated bandwidth in a bursty, on-demand way, while voice (and video) are a steady, constant flows of traffic, much like water coming out of a faucet. When you send a web request, the transmitter in your device generates a quick short transmission and then goes idle. You receive the content in a matter of seconds and the receiver is idle. With voice and video there is no idle time. There is a constant flow of data bits.

In some cases, a client will have a number of remote sites, and instead of purchasing individual site services for each, we will construct a Group QoS PN or Group QoS Private Network. What we do is carve out a pool of bandwidth and assign it to these sites, so that they only share bandwidth among themselves. This leads to more predictable performance since the client owns all the sites and manages what they do. The features discussed here, rather than being applied to individual sites, can be applied across the entire PN or Private Network. It essentially makes the whole network look like one large site.

Finally, as a bonus, iDirect builds cRTP (Compressed Real Time Protocol) into the Hub and Remote. This is a “header compression” feature that reduces the amount of bandwidth, i.e. CIR, required to support a VoIP call. A typical VoIP call using a standard G.729(b) voice codec will require 24 Kbps of bandwidth per call, most of which is the header or packet identifier. cRTP reduces this overhead, such that the entire VoIP packet will now take 14 – 16 Kbps per call, and may perform even better with other codecs. Reducing the amount of CIR needed for VoIP, can lower service costs, by reducing the amount of bandwidth needed at a site. 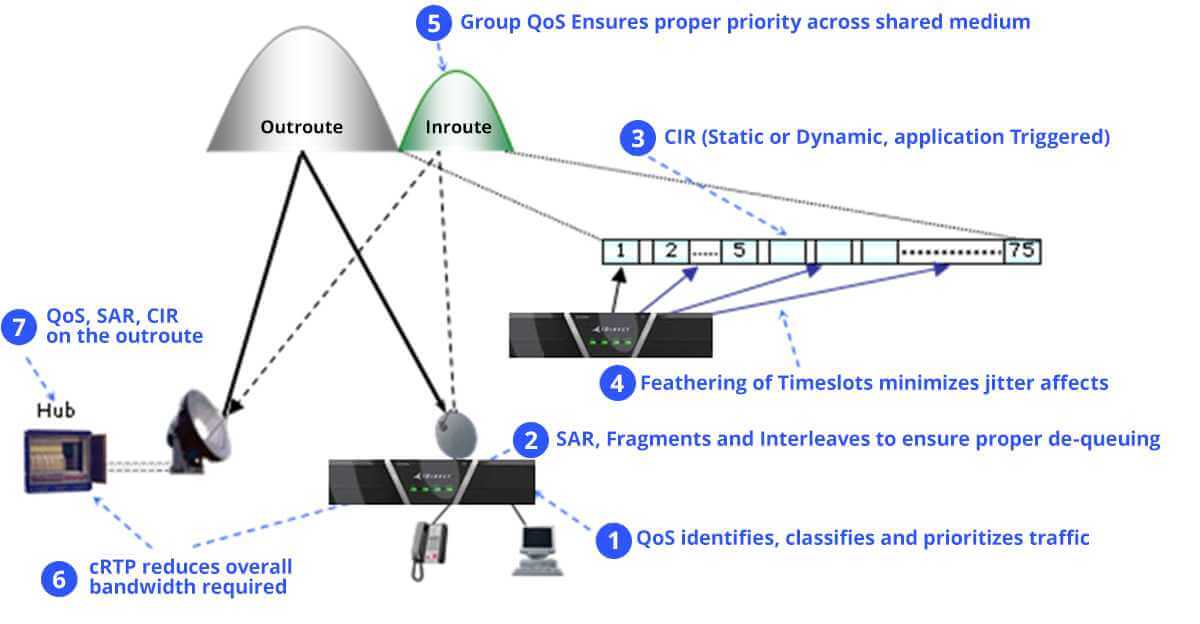 BusinessCom has been delivering VoIP over satellite for well over a decade. We offer our own VoIP termination service which allows remote site to make outgoing calls, and DID (Direct Inward Dial), so that they can receive calls, however we will configure the service to support any standard implementation of VoIP in order to deliver business quality voice, so long as there is sufficient CIR to do so.