In March 2020 we reviewed a new type of spacecraft tasked with the mission of extending the life of satellites in orbit. In that article MEV-1 Delivers a New Lease on Life, we discussed how the first MEV (Mission Extension Vehicle) was able to latch on to Intelsat 901, which had run out of maneuvering fuel required to keep a satellite fixed in orbit, and provide it with an additional 5 years of service. After this, the MEV-1 has enough fuel to service one or more additional satellites for another 10 years. This was a true space success story. 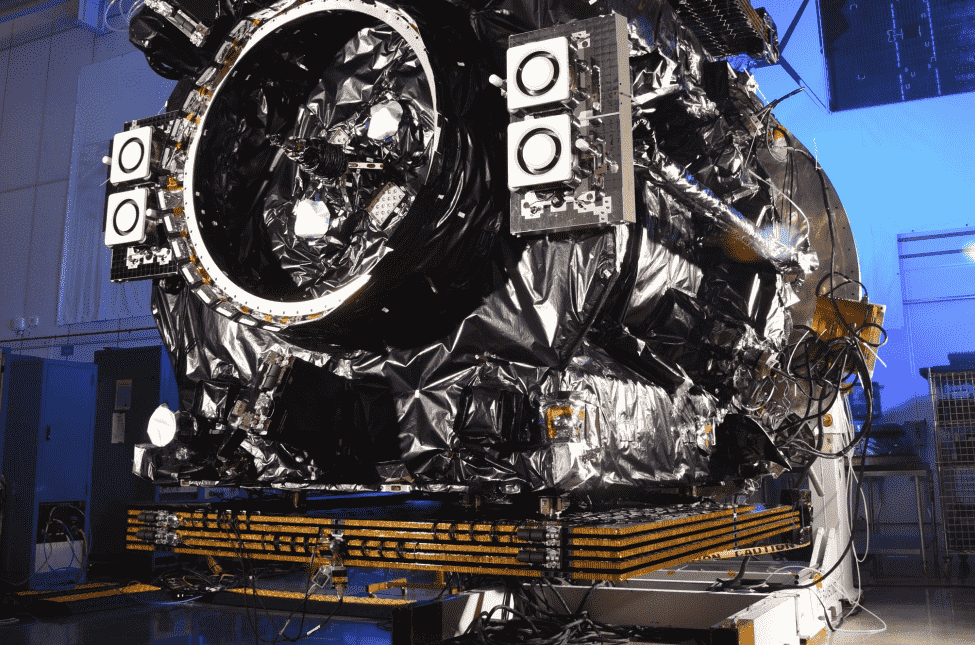 MEV-2 shown being prepared for launch, will act as a new engine and fuel tank to keep a satellite owned by Intelsat functioning in orbit for about 5 years.

On August 15, 2020, a second rescue satellite Mission Extension Vehicle-2, or MEV-2, was launched by the European Space Agency from their Space Center in French Guiana, South America. This second spacecraft, designed by Northrop Grumman, is part of a plan for new in-orbit services. It is anticipated that services of this type may grow to a multibillion-dollar market over the next decade.

“Satellite operators have few options when a satellite is aging, and they are all expensive,” said Joe Anderson, a vice president with Northrop subsidiary SpaceLogistics, based in Dulles, Va. Northrop’s new service is the first in which a private company has the ability to extend the life of large, expensive satellites beyond their designed life expectancy.

The seven-month journey will terminate with MEV-2 completing a rendezvous with Intelsat 10-02, a large communications satellite. Launched in 2004, the aging satellite has exhausted the fuel needed to keep it in a precise orbital position. The MEV-2 will clamp on to the satellite and become its new engine, keeping it in a proper orbit and with its antennas correctly pointed to Earth. MEV-1, mentioned above is operating successfully, acting as a supplemental engine for Intelsat 901 which had been launched in 2001.

While it is expensive to launch and operate the MEV missions, the payoff is quite good, as large communications satellites such as these cost between $150 – $300 million. Extending the life of such satellites versus replacing them can be a smart financial move. While pricing has not been officially announced, Intelsat filings with the SEC (Securities and Exchange Commission) indicate that the company would be paying on the order of $13 million per year. Keeping a satellite operational for five years at a cost of $65 million, can be more economical than junking and replacing it, particularly if it has most of its capacity sold. It also frees up capital to be used on other projects. After 5 years, MEV-2, like its predecessor, can further extend the life of the satellite or move to other missions.

Solar panels fuel the electric engines that power the MEVs. This allows them to raise their orbits and control the Intelsat satellites. The electric thrusters are efficient, but they take longer to reach a high orbit than larger chemical propulsion engines. Upon arrival, a hydrazine chemical propulsion system is used to rendezvous with the target satellite.

Anticipating another successful mission for MEV-2, Northrop nevertheless has decided not to build additional MEVs, but rather to develop a new platform with additional capabilities. The Mission Robotic Vehicle, or MRV will carry several life extension “pods.” These are small electric engines that can be distributed to multiple satellites during a single mission. The company believes they will boost the cost efficiency of the missions. The MRV will be designed to inspect satellites and perhaps even conduct limited repairs. Intelsat has expressed interest in the new development. They are making money because of MEV-1 extending a satellite’s life, but in the long run, the MRV will be more financially attractive if it can extend the life of several Intelsat satellites with each launch. Intelsat has an aging fleet of 51 operational satellites. The cost advantages of servicing several satellites with a single mission, rather than purchasing many MEVs are self-evident.

Northern Sky Research, based in Cambridge, Massachusetts says that spacecraft such as the MEV and MRV are part of an emerging sector in commercial space, referred to ass “in-orbit” services. They suggest that the commercial market for such services should generate about $3.1 billion over the next decade. Additional platforms will provide relocation or repair and will help governments deal with the growing problem of space debris as thousands of new satellites are launched. See Cleaning Space Debris – An Update

The fastest segment of the Oil and Gas industry is mining. This market presents…

Satellite has long been recognized as a key player in disaster recovery scenarios.…