A client recently requested a quote for a 10 Mbps x 10 Mbps service. It sounds simple enough, but as has been
discussed in another article about modcods (modulation and coding), there are several factors involved in quoting a
broadband satellite circuit.  The satellite band, beam, signal strength, the climate, the size of the antenna and
power of the BUC enter into the equation, and now BusinessCom Networks is generating quotes with two options:
DVB-S2/ACM and DVB-S2X/ACM. What is this all about?

DVB-S or Digital Video Broadcasting Satellite was developed and first launched in 1994 in Thailand and South Africa.
This format became popular for delivering digital TV broadcasts and is used to deliver services to every continent
in the world. DVB-S supports MCPC (Multiple Channel Per Carrier) and SCPC (Single Channel Per Carrier), which are
used to deliver broadband and private data circuits. The system also supports direct-broadcast satellite television
from providers such as Sky, Astra, Dish Network, Globecast and Bell TV.  With advances in technology, and the need
for higher speeds and throughputs, the DVB-S standard needed to be advanced.

While the driving factor behind DVB-S2 was support for HDTV services, the new standard had advantages for broadband
as well.  Some of the improvements include:

– >Low Density Parity Check (LDPC) Forward Error Correction.  This is a method for sending a message
over a noisy transmission channel.

– >Variable Code Modulation (VCM) provides variable levels of error protection to different
components within the service. This is performed by permitting various combinations of modulation and FEC (Forward
Error Correction) to be applied to different parts of a data stream.

– >Adaptive Coding and Modulation (ACM) provides an extension to VCM.  It provides a feedback path so
that various levels of error protection can be applied in near real time as signal propagation changes.  In
practical terms, this takes available link margin that is normally used to overcome deteriorating weather conditions
and converts it to performance gains for data.  ACM provided a real benefit to broadband satellite services.  Rain
fade, antenna pointing errors, local noise and interference, can all interfere and cause satellite performance to
degrade.  To overcome slowdowns or outages from these conditions, operators apply or reserve “link margin” or some
amount of capacity that is essentially “set aside” and used as needed when conditions degrade.  This works but is
highly inefficient.  Rather than sitting idle, ACM allows this link margin to be used to transmit data, when
conditions are optimal, thus addressing both efficiency and availability. 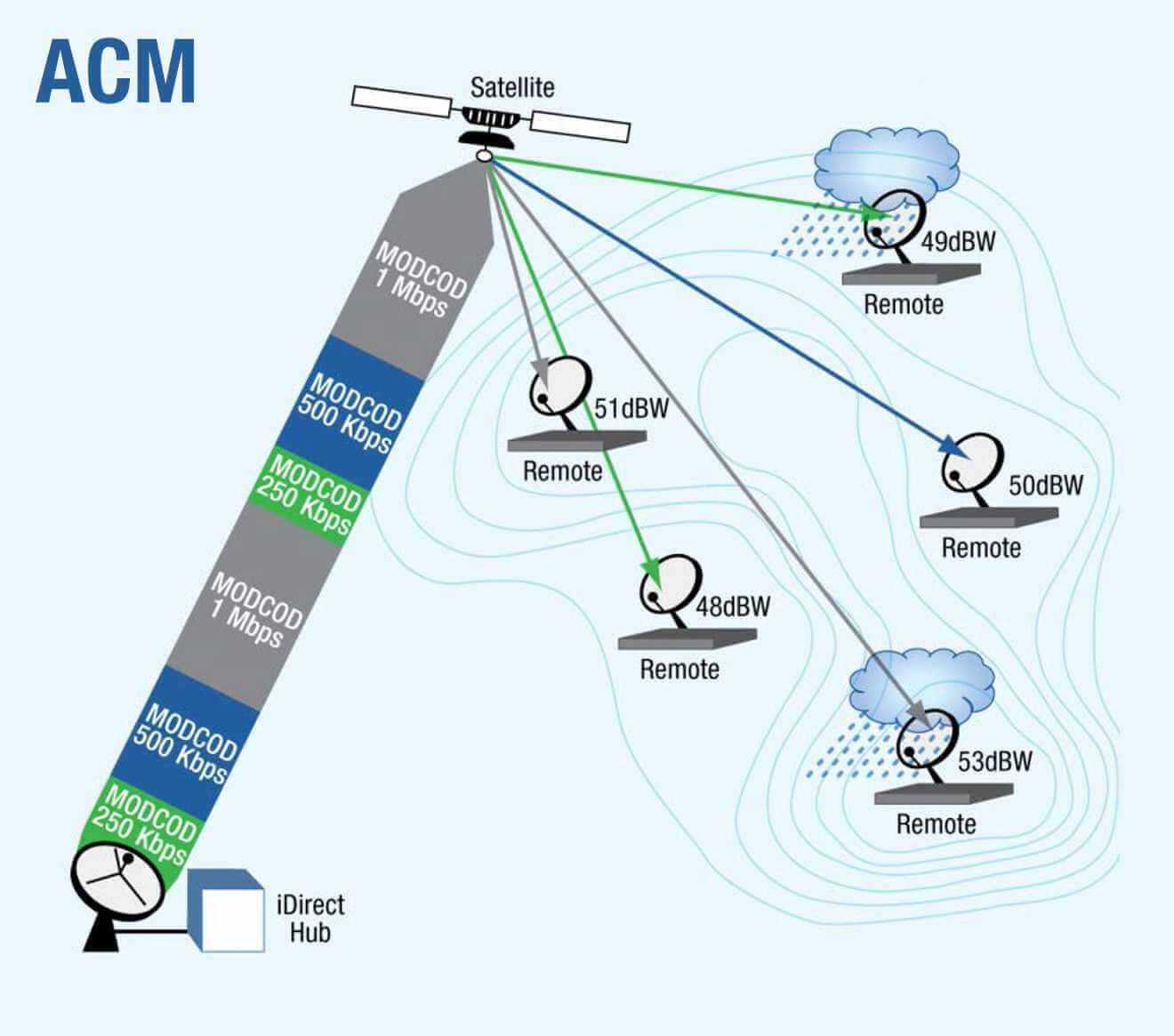 – >DVB-S2 standard added 8-PSK, 16-APSK and 32-APSK. What these modulation options do is provide
better spectral efficiency – or bits per symbol.  This allows more data to be sent in the same bandwidth.

DVB-S2 provided a 30% improvement in spectral efficiency over the original DVB-S. The standard was published as an
ETSI (European Telecommunications Standards Institute) in 2005. Vendors such as iDirect who had developed a
proprietary TDM solution that outperformed DVB-S, switched to DVB-S2 when it came out, because it offered even
greater efficiency.

DVB-S2X is not a new DVB-S model but is an extension.  Specified in the mid 2000’s, it adds additional technology and
features including DTH (Direct to Home), VSAT and DSNG (Digital Satellite News Gathering).  DVB-S2X is focused on
emerging markets such as 5G.  New features include: 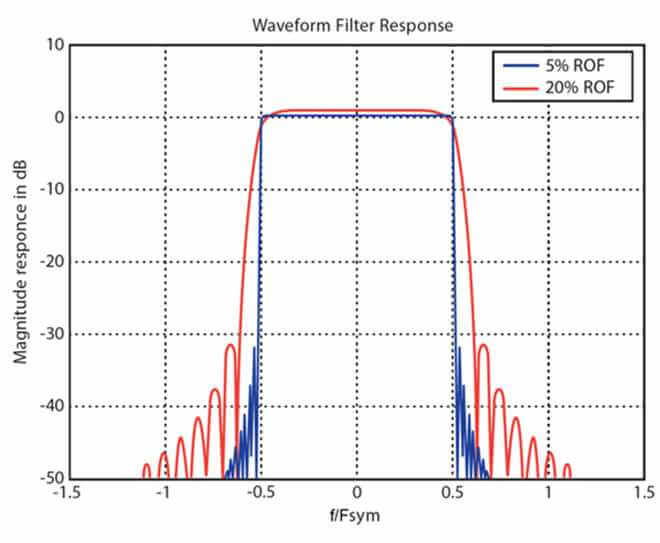 – Smaller filter roll-off options of 5%, 10%, 20%, and 35%.  The ROF or roll-off factor determines how much capacity
can be squeezed into a particular band of spectrum.  The satellite’s signal is filtered or masked and the “edges” of
the signal drop off and are not used for transmission; i.e. wasted.  The lower the ROF, the more of the signal that
can be used to transmit data.

– Channel Bonding up to 3 channels.  This provides a mechanism to deliver very large circuits with high aggregate
data rates.

– Very low SNR operation supporting C/N of down to -10dB

– Super Frame option is a development intended to help address beam hopping, as in a maritime vessel or airplane
passing from satellite beam to satellite beam.  It also supports switching in multi-spot-beam satellites, such as
most of the HTS (High Throughput Satellites) being launched today.

The DVB-S2X standard was published in 2015 and has been swiftly implemented by satellite vendors.  The new features
enable efficiencies at higher capacities, and more granularity or control over how they are implemented.  The new
features pave the way to intelligent terminals that are defined by SDN (Software-Defined Architecture), allowing new
capabilities to be added as they arise – for example support for LEO and MEO (Low and Medium Earth Orbit)
satellites, as well as supporting increasing data rates.  DVB-S2X enables satellite networks to scale more cost
effectively, managing many Mbps of capacity across multiple spot beams, creating virtual bandwidth pools.  The tools
are in place to support integration with other terrestrial and 5G mobile services, tying existing OSS and BSS
(Operational Support Systems/Business Support Systems) into the satellite platform. Finally, as mentioned above, the
new features enable air, maritime and even “connected car” services, to maintain internet connections, as users pass
from beam to beam.

DVB-S2X is a relatively new standard, and we have yet to see all the features that it will unleash and support.  For
now, what we have is an option to quote dedicated circuits at better prices. At BusinessCom Networks, we frequently
quote dedicated circuits using both DVB-S2 and DVB-S2X options. The ODU (outdoor unit) is generally the same, but
the DVB-S2X modems can cost significantly more.  However, the cost savings will generally justify the more expensive
hardware in a relatively short time.  Clients who expect the circuit to remain in place for a long time will almost
always benefit from taking the DVB-S2X option.

“Just give me a quote,” the client demands, on the phone. “What will…

A new concern with proposed mega constellations of LEO satellites has emerged,…

November 2018 is scheduled to be a busy month for the FCC. It will be voting…