The Story of a Historical Communications Satellite

In April of 2018 we posted an article about Vanguard 1, a grapefruit sized satellite launched in 1958 (and still flying!) This was an early exploratory footstep into today’s amazing satellite industry. See: And a Grapefruit Satellite Shall Lead them to Space. In this article, we will look at another significant development in the satellite communications industry.

Stepping back into my boyhood, we find a time of Cold War tension, with America out of Korea but stepping into Vietnam. The US military was modernizing and timely accurate information across the globe was of paramount importance. The US military could arrive on the ground almost anywhere in the world in a matter of hours, but once on station, the availability of reliable long-distance communications was a huge problem. Communication was needed between various branches of the military in the air, on the ground or at sea. Command and control communications needed to support COTM (Communications on the Move) with airplanes, vehicles and vessels. At that time, in the early to mid-60’s, there was no single tactical communications system in place that could meet those needs. 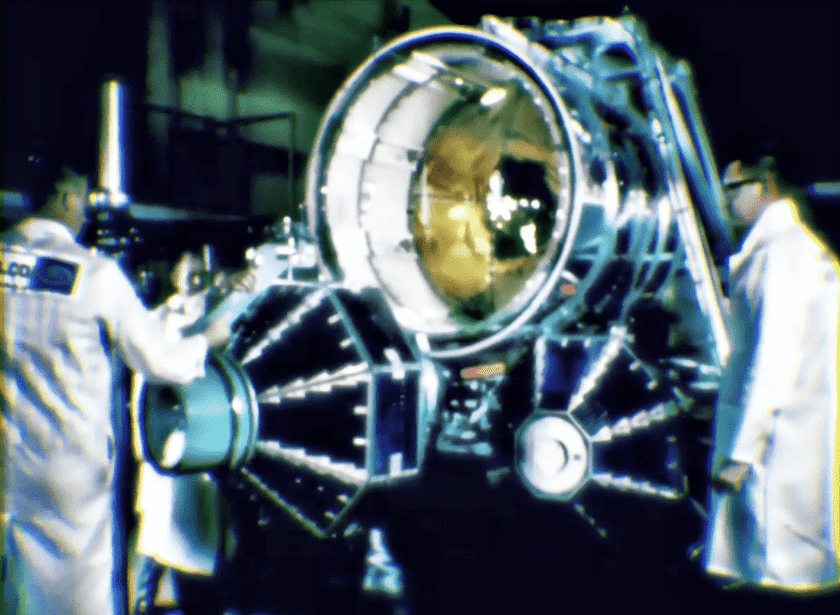 The communications satellites we enjoy today, began, in large part, because of the need for global military communications. The story begins with the development of the Tactical Satellite Communication Program (TSCP). In early 1965 the TSCP reconfirmed its need for tactical satellite communications for any point on the globe. A project began with the US Air Force to develop low rate digital communications via UHF satellite frequencies for airborne forces. In cooperation with the Aerospace Corporation the Air Force project management team conceived of the experiment to test UHF satellite communications and did the analytical work to make it happen. The MIT Lincoln Lab was brought in to do testing on the effects of RF (radio frequency) interference. They needed a solution that would work in the jungle and operate under difficult weather conditions. Lincoln Lab, already under contract to the Air Force, made conceptual changes that resulted in the experimental satellite that would soon be launched by a Titan 3C booster.

Concurrently with the development of the satellite, similar projects were embarked on to develop communications equipment that could work with the UHF satellite. Hardware was developed or adapted for ground stations, and several SAC (Strategic Air Command) aircraft were outfitted with radio equipment to communicate with the satellite for operational feasibility testing. In late 1965 the Army and Navy were invited to participate, and both accepted. In several separate military locations, equipment was developed so the service could be tested in the air, at sea and on the ground.

The Army worked to develop air transportable ground terminal communications equipment that could send and receive both teletype and voice communications. The Air Force and Air Weather Service contributed to test the effects of atmospheric and oceanic interference on the signals. Their job was to evaluate and report the effects of natural environmental impacts on the communications. This work all proceeded, while the satellite itself was under construction.

The communications equipment was based on off-the-shelf teletype, airborne thousand-watt transmitters, and miniature solid-state receivers, by ECI, a St. Petersburg, FL company in the author’s old stomping grounds. They also developed special antennas and sensitive gear to be included with the satellite to measure and report interference. The result was the Lincoln Experimental Satellite number 5, nicknamed LES-5. The satellite was a 102 kg (225 lb.) cylindrical satellite measuring 6 feet long and 4 feet (1.8 m by 1.2 m) in diameter. Using technology developed by ECI, the satellite would transmit the first circularly polarized UHF signals from space with an output of about 50 watts of effective radiated power. The switchable bandwidth could be commanded to operate at 100 kHz or 300 kHz. 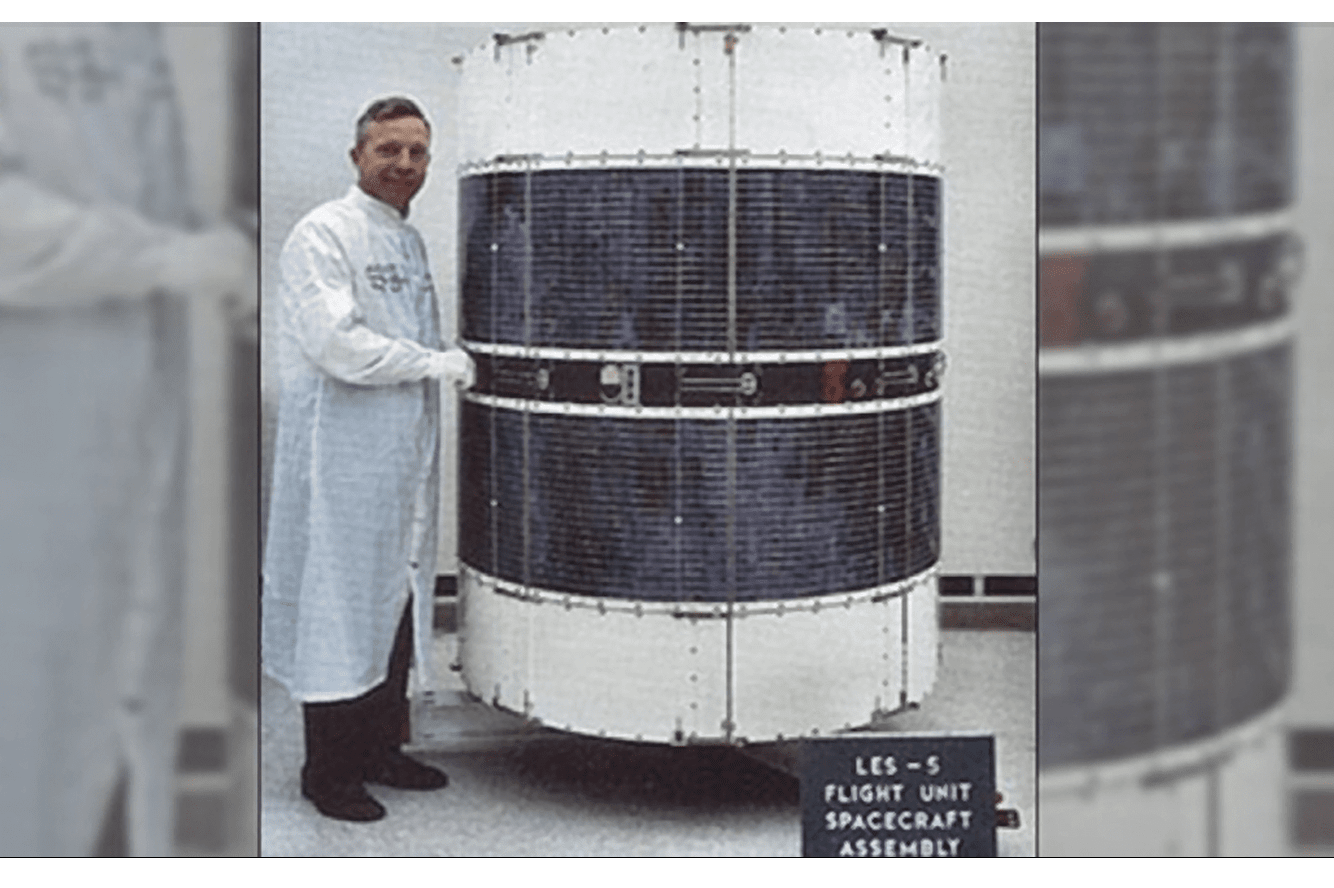 In June of 1967, the satellite was delivered to Cape Kennedy, FL, where it was to be launched with five other satellites. Placed aboard the Titan 3C space booster, it was launched on July 1, 1967. The first stage was powered by liquid fuel engines and a second stage powered by solid propellant engines. After the second stage burn was completed, the third stage in the nose cone powered the satellite into a low earth parking orbit. At the proper time, the engines were commanded to fire again, and the vehicle went into a transfer orbit that raised it to a circular, equatorial, nearly geosynchronous orbit at 22,000 miles (35,400 km) above Earth, at which point the satellite was released. The satellite was set into a spin, and the solar panels were deployed. Initial checks all went well, and the satellite was ready for a series of planned tests.

Tests began with Lincoln Labs’ mobile terminal, tactical transmission system, and a new device called a “message composer” that allowed an operator to type a message, view it on a screen, verify it and transmit it. A monitor allowed researchers to see the message transmitted to the satellite, alongside the message received from the satellite, and the associated latency between the outgoing and incoming text. The team quickly confirmed that the satellite could accurately receive and retransmit information.

A “roll call” was conducted between a combination of players and all participating terminals, with complete success. All the testing mentioned here was conducted within the first 36 hours of the satellite coming online. After that joint roll call, communications were carried out on a rotating schedule with all participants. Tests moved around the world, including Southeast Asia, an area of high importance given the Vietnam War that was ramping up. Operations were also conducted in Panama to test the effects of very heavy foliage and adverse weather conditions. All program objectives were achieved. The efficacy of using UHF satellites for long distance communications between air, land and sea participants was demonstrated with great success. Coming out of the program, the goals were for higher power, circularly polarized antennas and increased bandwidth, but LES-5 certainly provided proof of concept. With the new communications method came a need to develop anti-jamming technology.

Amateur visual and radio astronomer, Scott Tilley, who discovered LES-5 is seeking support from persons originally involved in the mission to see if further research can be conducted to study the health of the satellite and to see if anything further can be learned from a satellite that has been in space for 53 years – a historical satellite that helped pave the way to today’s high power communications satellites that blanket the world.

What Is High Throughput Satellite (HTS) Internet & What Is Special About…