All electromagnetic phenomena are based on the interaction of waves and materials. For example, parabolic satellite antenna reflector interacts with incoming wavefront, reflecting and focusing it on the feed to produce an amplified signal. Electromagnetic properties of any material depend on the organization of molecules and atoms in its lattice. Novel materials, such as Teflon®, can be synthesized at molecular level in a laboratory to achieve properties not commonly found in nature. Likewise, artificially designed metamaterials extend our possibilities of creating objects that interact with the world beyond of what is possible with conventional materials.

Although early explorations of artificially created materials can be attributed to Sir Jagadish Chandra Bose (1858–1937) in the late 19th century, the first practical experiments with metamaterials began in 1940s at Bell Laboratories, by Dr. Winston Kock (1909–1982) in consultations with Dr. Sergei Alexander Schelkunoff (1897–1992)—a distinguished mathematician and electromagnetism theorist. The concept is that an artificial structure of discrete elements is capable of interacting with electromagnetic field with new, emergent properties. In his work, Kock used the name of artificial dielectric. A single element of an artificial dielectric structure is much bigger than individual atoms or molecules of a naturally occurring dielectric. The property of metamaterial as a whole arises from the geometry of individual elements rather their intrinsic properties. A metamaterial, hence, can be defined as a composite structure made of array of elements embedded in a non-conductive support matrix, designed to perform with emergent electromagnetic properties. From Cai & Shalaev (2010):

The size, shape and position of individual elements in a metamaterial are selected to perform at specific operational range: from low-frequency radio to optical, X-ray and gamma-ray wavelengths. These artificially created structures perform as novel man-made materials with properties often seeming to defy natural electromagnetic principles.

Kock (1946), the pioneer of the metamaterial research field, in his seminal work, has proposed “metallic delay lenses” that reduce phase velocity of radio waves, effectively achieving focusing action in the antenna suitable for microwave applications. This was, basically, a “radio lens” made of metal, designed to interact and focus radio waves instead of light—see figure 1. Exactly as the molecules arranged in a lattice pattern of a telescope lens made of glass interact with the optical wavefront and focus light, individual metallic elements in the Kock’s lens interact with the radio portion of electromagnetic spectrum and focus longer wavelengths. 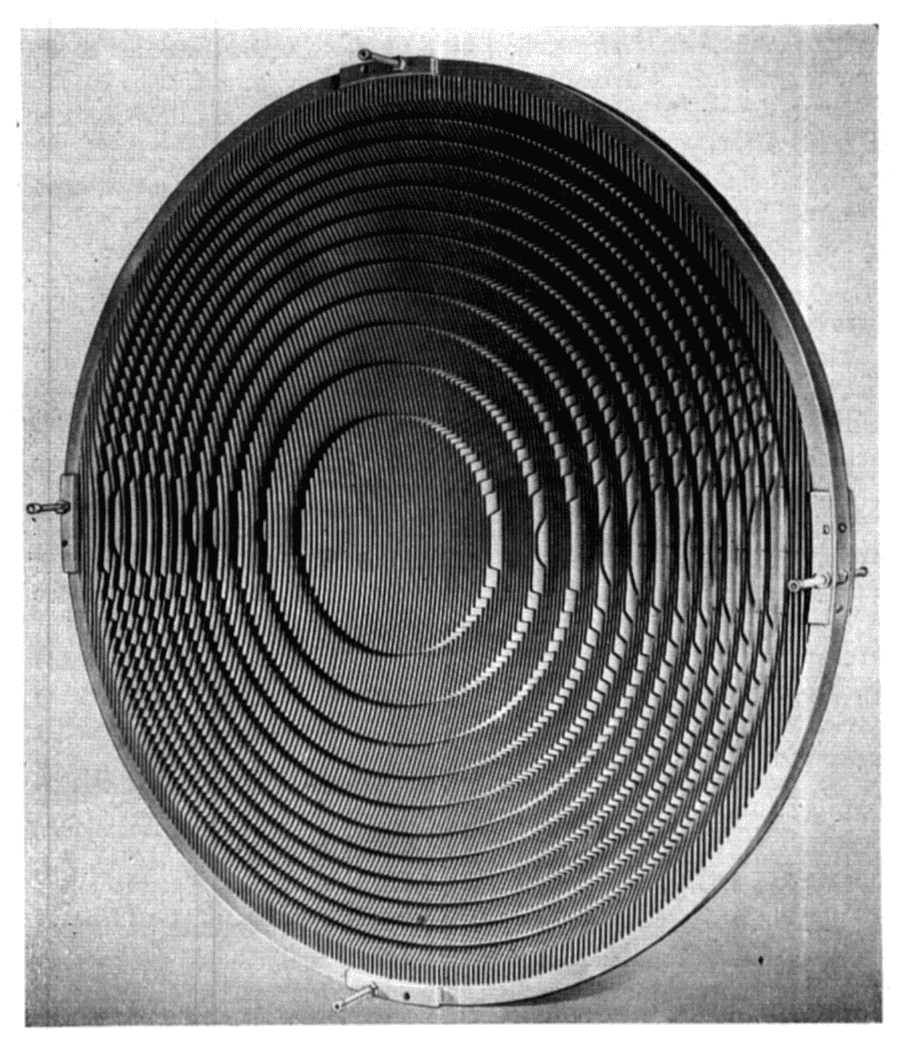 Fig. 1—Metallic lens proposed by Kock (1946) in Bell Laboratories. The design was severely limited in bandwidth due to “chromatic aberration” at radio wavelengths.

The metallic lens design was later improved by Kock (1948) where he proposed to arrange individual spherical elements in lattice, shown in figure 2. Such a composite structure, he wrote, can be designed to operate at any wavelength and allows to overcome bandwidth limitations present in the original metallic lens design.

Another variant, proposed in the same work, arranges individual elements in thin layers—sheet lenses made of conducting metallic strips in a cellophane matrix. In successful prototypes made by Kock (1948) a conducting paint was sprayed on dielectric sheets through mask, forming three-dimensional array of delay elements, shown in figure 3. This is a design and look modern flat panel antennas resemble quite closely. This design was able to achieve tighter beam and higher gain at microwave frequencies, paving the way for future metamaterial antenna research and practical applications.

Fig. 2—Improved design proposed later by Kock (1948) with lattice of conducting spheres. This structure responds to radio waves as a molecular lattice responds to light waves, with each spherical element acting as an oscillating dipole. 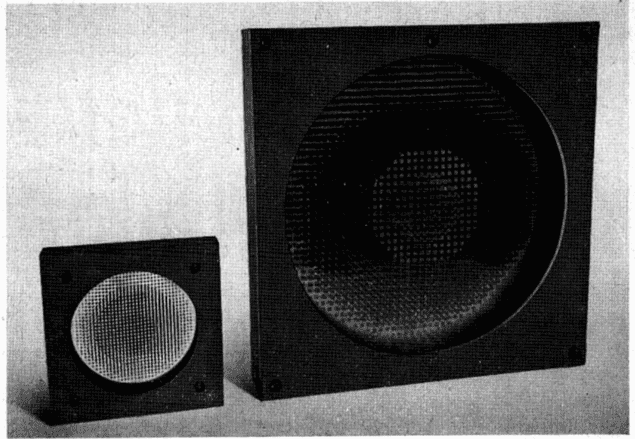 Gradual improvements in artificial dielectrics, bringing about increased gain, improved directional qualities and lower internal reflections, have ultimately enabled the creation of the antenna compatible with existing geostationary satellite link budgets. The first commercially successful metamaterial antenna designed for satellite telecommunications applications, called u7, was introduced by Kymeta™ in 2017. This event represents a breakthrough in the application of metamaterial antenna technology for commercial markets.

A major conceptual departure from Koch’s lattices with metallic elements is that the u7 is electronically steered. Rather than using metallic conductive elements with fixed properties, Kymeta u7 is based on tunable liquid crystal elements, similar to those used in liquid crystal displays (LCDs), allowing real-time adjustment of antenna’s electromagnetic properties on demand. As the permittivity of each liquid crystal can be tuned by applying varying levels of input bias voltage, the u7 antenna can steer its beam electronically and control polarization angle while having no moving parts, enabling it to automatically locate, acquire and continuously track the satellite, at low power consumption levels.

Approximately 30,000 liquid crystal elements in the u7’s lattice allow to achieve beam patterns comparable to standard parabolic reflectors, control side lobe emission, and achieve signal gain sufficient to deliver broadband IP performance on current generation geostationary satellites. The electronic steering implemented in u7 works via standard OpenAMIP protocol and is compatible with existing satellite platforms, such as iDirect Evolution® and Velocity. This makes Kymeta u7 the most advanced antenna commercially available for fixed, portable and on-the-move satellite broadband deployments in 2020. And the production of liquid crystal metamaterial antenna is relatively straightforward to scale via proven LCD manufacturing processes (Stevenson et al. 2016).

The high radio-frequency performance of Kymeta u7, combined with its low profile, weight and power consumption, makes it an attractive terminal of choice for a wide range of applications in defense, government, public safety and commercial markets. The ability of u7 to acquire a satellite automatically creates an advantage for discrete military operations, especially as the terminal does not require a SATCOM professional to operate in the field. Variants of u7 exist in ruggedized packages ready for military deployment, either as vehicle-mounted or transportable fly-away terminals.

Fig. 5—Kymeta u7 installed on a vehicle (BusinessCom service test)

The u7 enables public safety organizations to receive real-time data without having to pause assets to communicate, which creates operational advantage in emergency situations, e.g. for ambulance or disaster response vehicles on the move. BusinessCom has successfully tested its on-the-move service with a u7 terminal connected with zero packet loss rate, at IP bandwidth rates sufficient to carry multiple high-definition video streams in both directions—at speeds exceeding 180 km/h over ground.

As u7 can co-exist on the same satellite network with other VSATs, a u7-enabled remote deployed in the field can share the same bandwidth pool and connectivity topology with other assets based on fixed and motorized parabolic reflectors. A u7 can also be deployed on maritime vessels: for commercial shipping, pleasure, fishing, patrol and other craft. An electronically steered terminal with no gimbals or motors is expected to require significantly lower maintenance effort and provide longer mean time before failures, compared to traditional gyro-stabilized reflectors.

Metamaterial technology is now entering our lives. The designs are continuously improved, the wavelength range continues to expand and the set of applications is becoming more diversified. Luneberg lens, a design geometrically resembling some of those suggested by Koch more than 70 years ago, could be feasible antenna of choice for the Square Kilometre Array Radio Telescope (Parfitt et al. 2000). Metamaterial lenses like these are now considered for airborne ultrasonic acoustic imaging (Xie et al. 2018). Graphene metamaterials are proposed as high-yield, compact, tunable X-ray sources, with potential wide applications in medicine, engineering and natural sciences (Pizzi et al. 2020). Liquid crystal metamaterial antennas are a good candidate for automotive radars, due to their low manufacturing costs and proven manufacturing process (Che et al. 2018).

Satellite industry is now undergoing a rapid change with the advance of non-geostationary satellite constellations, such as Starlink, Telesat LEO and others. Affordable efficient flat panel antennas operating at Ku and Ka frequency bands would be a cornerstone for the success of these multi-billion projects. Kymeta’s liquid crystal metamaterial antenna technology is well-positioned to become the terminal for next generation satellite telecommunications solutions, holding potential for incredible life changes worldwide.

The new Kymeta u8 terminal, shown in figure 6, scheduled for the release in Q4 2020, will build on the success of the u7. It will feature enhanced operational radio-frequency bandwidth capability with full Ku-band spectrum coverage, DVB-S2X compatibility, optimized roll-off filters and integrated high-power amplifier. The u8 will consume less power and will add approximately 40% more power in both directions. With BusinessCom’s on-the-move service this converts to increased throughput, lower cost and higher service availability. BusinessCom is excited to stand at the forefront of this technology’s advance, along with Kymeta and its partners.

On September 29, 2017, AsiaSat 9 was launched without incident from the Baikonur…