Orbital debris continues to be a nagging problem for the continued expansion of NewSpace, in the LEO (Low Earth Orbit) operating region. We discussed this problem in the article: Could the Kessler Syndrome Put an End to NewSpace. Various technologies are being proposed and tested to a) prevent the addition of more debris, and b) work to remove existing debris. TriSept Corporation, who provides launch integration and mission management services is working with Millennium Space Systems and Rocket Lab to test new technologies for managing space debris. Rocket Lab, whom we visited in NewSpace Rockets Getting Smaller is beginning to present competition to SpaceX, who is now entertaining their own small rocket launch vehicle, while Rocket Lab, stealing a page from SpaceX, is studying ways to make their rocket reusable. The current idea is to snatch the parachuting rocket out of the air with a helicopter. 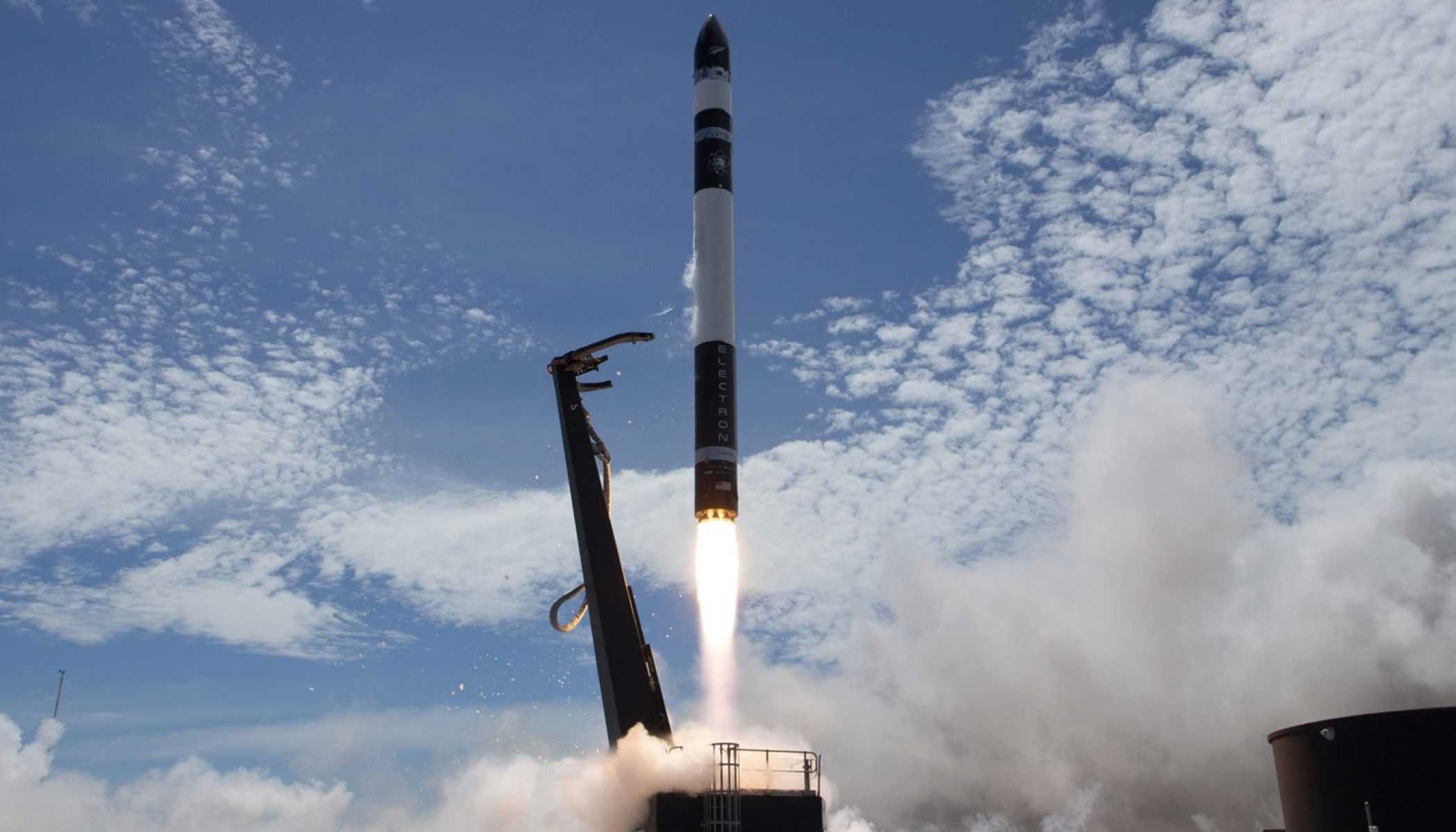 In early 2020, Rocket Lab is scheduled to deploy the RAPTOR satellite from its Electron rocket. The 25kg small satellite will have two payloads designed to test technology from Tethers Unlimited, designed to deorbit debris. Tethers Unlimited was founded in 1994 to develop products based on space tether technologies with the goal of cleaning up space debris and transporting people and payloads through space. The company has a variety of technologies including Software Defined Radios, orbital manufacturing & construction, and propulsion and deorbit solutions. In the upcoming launch, its electrodynamic tether will be tested.

Most rocket systems expel a chemical propellant to create thrust, which means that a satellite using this technique to deorbit, must carry fuel along with it that will be used to deorbit when the satellite mission is complete. This means the satellite must be larger and heavier, and thus more expensive to build and launch. An electrodynamic tether generates thrust through Lorentz force interactions with earth’s magnetic field. In a Lorentz-force, a magnetic field is created by the motion of an electrically charged particle—such as a proton or electron. If that electrical charge is moving through an external magnetic field, such as earth’s magnetic field, there will be a magnetic attraction or repulsion force, depending on how the two magnetic fields interact. This force can be used to propel the spacecraft without any chemical propellants.

The tether is a long conducting wire extended from the spacecraft. Earth’s gravity gradient field (also known as the “tidal force” pulls the tether taut and naturally aligns in a vertical direction. As the tether orbits the earth, it crosses the magnetic field lines at high speed (7 – 8 km/s). Running a conductor through a magnetic field induces a voltage along the tether. This “motional EMF” (electromotive force) voltage can be as high as several hundred volts per kilometer. The tether can be used to reduce the orbit of the satellite it is attached to. The jargon is a bit technical, but the EMF voltage creates a current along the tether. The current interacts with the earth’s magnetic field to cause a “Lorentz JXB” force that opposes the motion of the tether and whatever it’s connected to. This “electrodynamic drag force” decreases the orbit of the host spacecraft and its tether. The tether is taking the orbital energy of the host spacecraft and converting it to electrical power.

The devices are quite compact and simple. Designed for NanoSats and CubeSats, a small rectangular box is mounted with four screws to the satellite. Solar cells can be mounted on top of it, if desired. For a CubeSat, the device is only 100mm x 83mm x 6.5 mm in size. The actuator used to deploy the Tether Tape utilizes a shape memory alloy (SMA). This is an alloy that can be deformed when cold but returns to its original shape when heated. The SMA simply requires a constant source of low power for activation. When deployed, a several hundred-meter-long conducting tape is released, which creates aerodynamic drag in addition to the electrodynamic drag. It is not dependent on power from the deorbit spacecraft, and thus can even deorbit spacecraft that have malfunctioned. The unit is expected to cost less than $100,000. 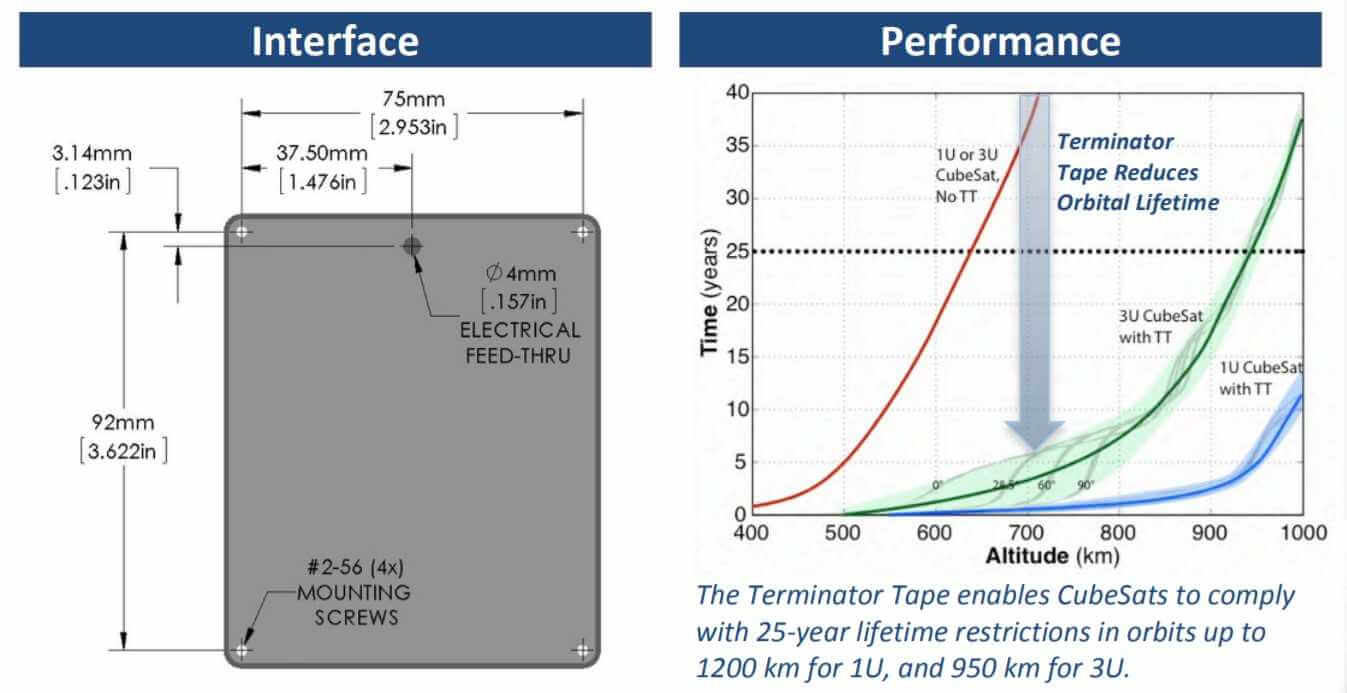 While the goal of the upcoming test is to deorbit a satellite, the power generated by the tether can also be used to power a spacecraft by using a power supply to drive current in the opposite direction so that it can “push” against the Earth’s magnetic field to raise the spacecraft’s orbit – without using any propellant. The Earth itself, along with its magnetic field creates a “reaction mass” that propels the satellite without any chemical propellants. One potential application is boosting the Space Station orbit, eliminating the need for NASA to continually send fuel up to the space station to prevent its orbit from decaying due to drag.

In the DRAGRACER mission, being coordinated by TriSept, one test satellite will be outfitted with the deployable Terminator Tape, which will be deployed by an onboard timer. The Terminator Tape is expected to add significant drag to the spacecraft and should dramatically accelerate reentry. New satellites are being required to provide some means of deorbiting them after their mission is up, and the Terminator Tape has a good shot at being a major supplier of deorbit solutions. In the test, a few days into the mission, the tether will be deployed on one satellite where it is estimated that the craft will reenter the atmosphere in two to four weeks, while the other satellite is expected to take eight to twelve months without the enhanced drag device.

Tethers Unlimited has other products in development, including the GRASP “Grapple, Retrieve, And Secure Payload” device which will allow small spacecraft to capture space debris in order to deorbit or dispose of it. They are also developing the “Terminator Tether” designed for larger satellites, which could be attached to space debris after GRASP has captured it, and then use the electrodynamic technology to deorbit the craft. With these two technologies, GRASP can clear out sections of space, freeing them from debris for new spacecraft to operate more safely. While the Kessler Syndrome certainly gives us reason for concern, developments like the Terminator Tape, give us reason to hope that space will remain usable. Now if we could figure out how to clean up all the plastic in the oceans…

While the satellite industry is all abuzz with “NewSpace,” down here on…