Several frequencies are used to carry satellite transmissions. The most popular today are C-band and Ku-band, with Ka-band deployments increasing rapidly. At the higher operating frequencies of Ku and Ka-band, the satellite signal strength may be affected by heavy rain conditions. C-band is mostly immune to poor weather conditions.

A problem arises when microwave and satellite transmissions have their signals attenuated, or weakened as a result of interference caused by raindrops. The raindrops weaken the transmission by absorbing and scattering the electromagnetic signals being passed back and forth to the satellite. The larger C band frequency waves pass through raindrops, but Ku and Ka-band frequency waves are close in size to that of raindrops, which act as tiny mirrors or prisms, reflecting, refracting and diffusing the signal. 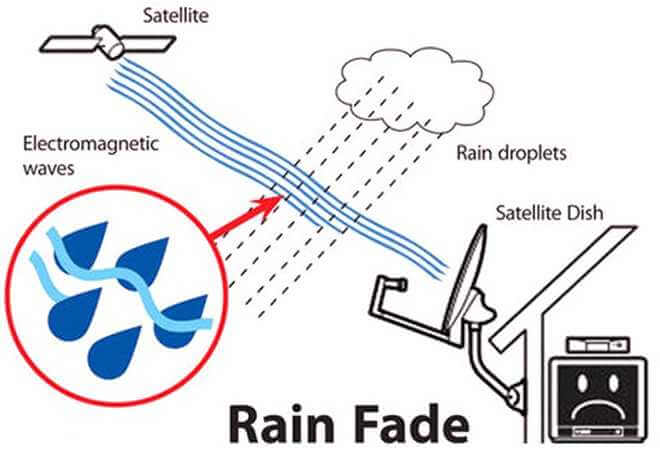 How much the signal is weakened depends on many variables, starting with how hard it is raining. To ensure satisfactory service levels, network operators will include a rain fade margin when designing services and calculating annual uptime. This is the amount of additional power added to the signal strength at the teleport and at the remote site terminal to compensate for any attenuation due to rain.

A popular technique to address the issue is the growing use of ACM or Adaptive Coding and Modulation by VSAT technology providers. This is a technology that automatically changes the forward error correction and modulation of a link to compensate for changing conditions. This technique maximizes link availability by reducing the order of modulation – that is making the signal less efficient as conditions degrade, as well as increasing the amount of overhead to maintain error-free transmission. The idea is that it’s better stay up and remain operational, even if a bit slower, than to go down completely. A properly engineered circuit will generally have relatively few ill effects as a result of rain.

Note that rain fade can be a problem at either end of the link – whether it is raining over the remote site or over the teleport – or both. In either case, the signal strength can be degraded resulting in higher error rates, and slower throughput due to retransmissions – or, on occasion, a complete loss of service in very heavy rain conditions. Retransmissions slow the service, because pending traffic is held up until packets that were corrupted by rain interference, are retransmitted and acknowledged as having been delivered properly. The more errors, the more retransmissions, hence the less new traffic there is going across the circuit.

The amount of rainfall determines the effect of attenuation and the period of disruption or degraded service. In some tropical/equatorial regions you can expect short periods where service slows almost every day during the rainy season for Ku and Ka-band systems. In more temperate climates, outages may be very rare and of very short duration. The elevation of the satellite is also a factor, as the more atmosphere the signal has to traverse, the more rain it may potentially have to pass through. A satellite low on the horizon will have to pass signals through more atmosphere than a satellite nearly overhead and thus may be more affected by rain. The good news is that in the places where it rains the most, along the equator, GEO (Geosynchronous Earth Orbit) satellites that service the region tend to be overhead, since these satellites are stationed over the equator.

The process of ensuring a particular service level that can be guaranteed with an SLA (Service Level Agreement), is based on the service provider performing an LBA or Link Budget Analysis. The LBA determines the appropriate antenna size and transmitter strength to support a given level of annual uptime. An LBA is performed by entering variables such as site location, satellite and orbital position, climate data, bandwidth, teleport earth station details, modulation and coding (modcod), forward error correction techniques, and other information to calculate the required transmitter and antenna size to support a particular link with a guaranteed uptime per year. In tropical regions a Ku or Ka system can be configured to provide additional uptime during rain, but that generally requires over-sizing the antenna and transmitter equipment, in which case, it may make more sense to go with C-band. For this reason BusinessCom will often recommend C-band in equatorial/tropical regions, particularly for larger sites or those that are mission-critical.

BusinessCom Networks has run LBA’s to engineer and pre-configure its commercial iDirect Broadband (iDB) services, which are delivered with a 99.5% SLA, something few other commercial broadband satellite service operators provide. This simplifies the process for clients, as they can look at their location on the satellite footprint map and easily determine the base hardware kit required to meet the SLA for a wide range of bandwidth options. For dedicated circuits, BusinessCom Networks performs a complete LBA to determine the hardware and modcod parameters required to deliver the standard SLA, or a customer-specified SLA. Satellite communications has been described as squeezing a balloon. Squeeze here with more aggressive modulation and coding, and it pops out there with larger hardware. Rain fade is another squeeze of the balloon that must be taken into account if one is going to deliver a consistent, reliable service.

In late September 2017, Hurricane Maria barreled through the Caribbean devastating…