The Brief Capture of a 1960s Relic

As Covid-19 ravaged our planet, and people hunkered down to social distancing, masks and toilet paper shortages, a visitor from space swung by, giving space enthusiasts a quick trip back to the 1960s. On August 19, 2020, an object was spotted using the Panoramic Survey Telescope and Rapid Response System (Pan-STARRS) in Hawaii. This vital tool for seeking out asteroids specializes in spotting fast-moving objects. At first it was assumed that this was an asteroid following a slight but distinctively curved path, which indicates a proximity to Earth. The appearance of curvature is caused by the rotation of the observer as our planet spits on its axis. The object was named 2020 SO. It was very unusual.

When he saw the data, Paul Chodas, head of NASA’s Center for Near Earth Object Studies in California, began to suspect that the object might not be an asteroid after all. First, there was the orbit, which was very similar to Earth’s heliocentric orbit around the sun. Most asteroids are on large elliptical orbits that do not orbit the sun in the same circular fashion as our planet. It does happen that on occasion, orbital trajectories for space objects, along with a little gravity assist from Earth, can allow Earth to briefly adopt a miniature moon for a short time, as our planet and the celestial object orbit the sun at slightly different speeds.

It was also noted that the object was moving slower than typical asteroids – much more slowly. And finally, after a month of observations, it was noted that the object wasn’t moving like a normal asteroid but was being buffeted about by the waves of sunlight hitting it. Asteroids are not easy to push around, but empty rockets are like tin cans that can be blown around by solar wind, while asteroids are like solid rocks, not affected much. Although slight, the pressure due to sunlight on a rocket body, much less dense than an asteroid, produces enough change in motion to be recognized in the data. Chodas realized that the object was almost certainly a rocket body from a mission to the moon. Had the object been a rocket sent to Mars or Venus, the orbital path would have been very different, but a flight to the moon, put the rocket on the same orbit around the Sun, as the Earth, given that both orbit the sun together.

The slow speed of the object was another clue. If 2020 SO was a rocket that sent spacecraft to the moon, it would have necessarily been moving slow. If you plan to land on the moon, you had best slow down first. Running the orbital data backwards, like rewinding a video tape, led to the realization that this was almost certainly the Centaur upper stage used to launch NASA’s Surveyor 2 mission to the moon on Sept. 20, 1966. Surveyor 2 was one of 10 missions to the moon that year, in the middle of the Cold War space race. It was launched on September 20 but crashed into the moon three days later. 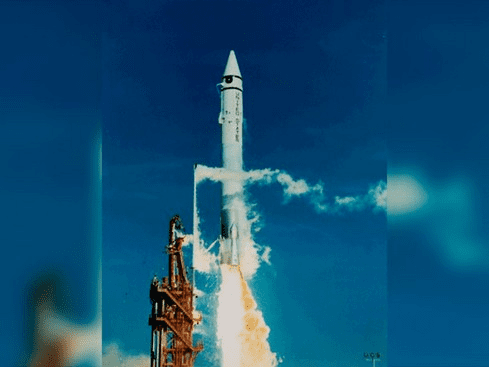 So how did the booster end up paying us a visit? The orbital motion of 2020 SO is controlled by the gravity of the Sun and Earth. In late 2020 as both the Earth and the booster were on a similar orbit, the Earth began to “catch up” to 2020 SO. Our planet’s gravity pulled the object, which was not yet identified, inside Earth’s “Hill sphere.” This is an area surrounding a celestial object where its gravitational field is stronger than all other sources of gravity. As a result, Earth temporarily captured the booster from the Sun. 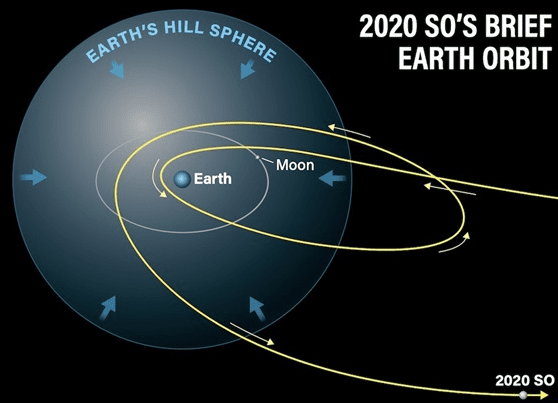 In November 2020, Earth temporarily recaptured a rocket booster originally launched in the 1960s. After a few months orbiting our planet, 2020 SO returned to its orbit around the Sun. Credit: Astronomy: Roen Kelly

Orbital energy in the combined Sun-Earth-object system remains constant, so no extra energy was imported to the booster before, during or after escaping from an Earth orbit, back to a Sun orbit. However, the energy level of this combined system determines the regions where a satellite moves. Objects in our neighborhood are going to be bound to either a geocentric or heliocentric orbit. The Earth is in a heliocentric orbit around the Sun, as was the booster, but for a short time, it entered a geocentric orbit around our Earth, like the many man-made satellites orbiting the Earth. This was made possible because of something called “lagrangian points.” These are points in space, associated with all celestial bodies, where the gravitational forces from a planet and a nearby body such as the Sun or Moon exactly balance the centrifugal force. That is the outward force you feel when you swing a ball on a string over your head. Very little energy is required on the part of spacecraft to stay in position at these “points” (actually an extended region), so it is a popular place to station certain types of satellites, particularly those tasked with long term monitoring projects. 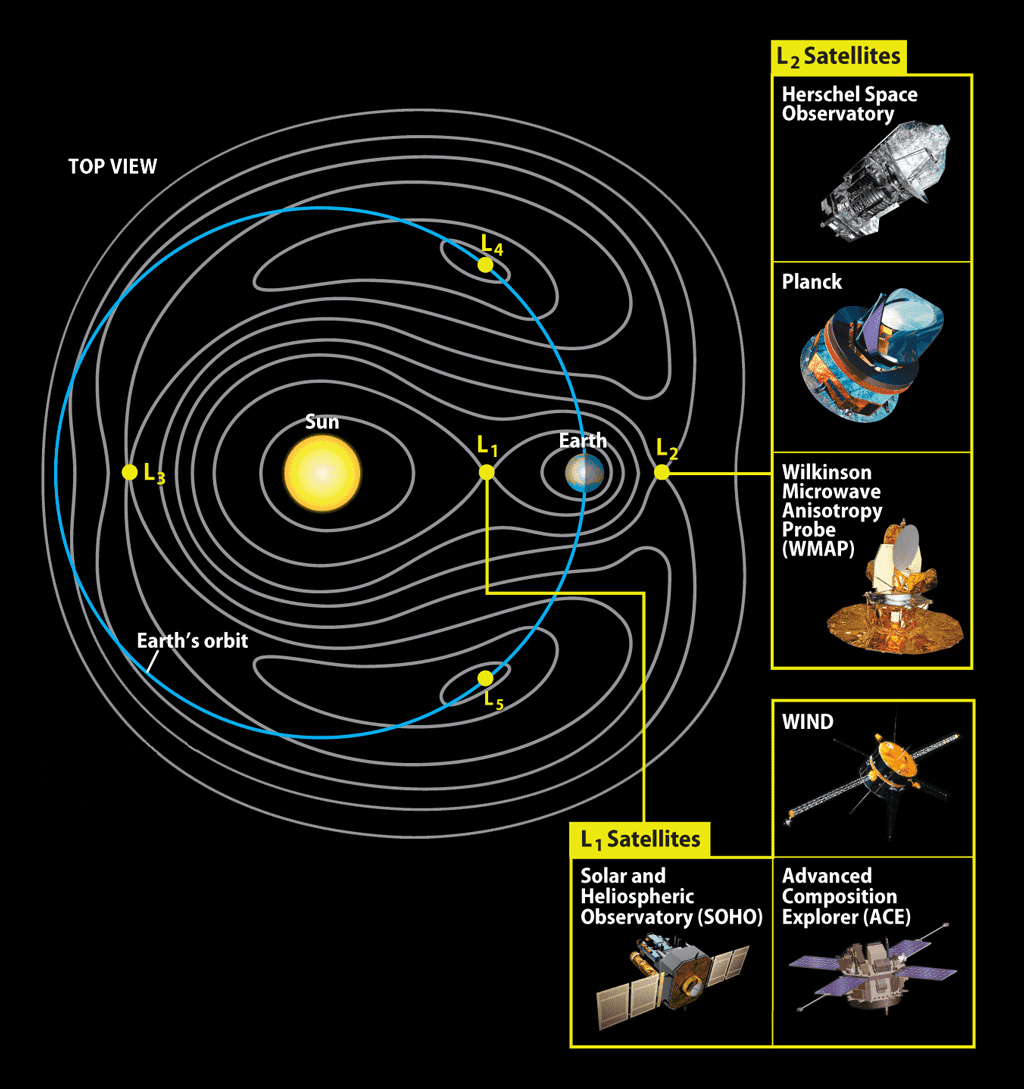 The Earth-Sun system has five Lagrangian points, each with an extended region where spacecraft can orbit with little fuel. Scientists place probes that monitor the Sun at the L1 point and craft that survey the infrared and microwave sky at the L2 point. Credit: Astronomy: Roen Kelly

At the point where the booster’s heliocentric orbit intersected the Earth’s Hill sphere, the booster found itself in the Lagrange L2 “gateway” and was captured into a brief orbit around the Earth, beginning in November 2020. In March of 2021, the booster, apparently having noticed that all the satellite conferences and shows had been canceled or postponed, quietly departed through Lagrange L1, bidding us adieu until 2036, when we will again match its orbit. As a result of its little fling with us, it will be further away next time, and should not be captured again, at that time.

Objects such as 2020 SO are of great interest to satellite engineers and researchers. They would like to understand the effects of long-term exposure to outer space, as this knowledge can help in developing more reliable, secure, and long-lasting satellites of all kinds. Perhaps when it returns in fifteen years, we will capture it.

A new concern with proposed mega constellations of LEO satellites has emerged,…