So many choices. ADSL, wireless, cable, fiber…. What role does satellite play in providing broadband services to enterprises? Accessing the internet over satellite is a technology and business option that has been steadily developing and maturing over the last few decades, and it continues to do so. Why should an enterprise select BusinessCom Networks satellite internet services to provide their broadband access?

How Does it Work?

Before answering this question, let’s look at how it works. One way to think of a broadband satellite, is a mirror in the sky. An Earth Station (large antenna and transmitter infrastructure) is typically installed in a location that is secure, and with access to multiple internet backbone providers. This facility is called a teleport, and it is loaded with redundancy, monitoring, management, backup power, and experienced engineers. Data from the internet is transmitted to a satellite orbiting above the earth’s equator in a geosynchronous earth orbit (GEO). The satellites in this orbit, rotate around the earth at the same speed that the earth spins, which keeps the satellite stationed over the same piece of geography. The satellite receives the internet traffic from the Earth Station and transmits it back to earth, to remote site(s) on the ground. Thus, it is acting almost like it was a mirror, simply reflecting the Earth Station traffic back down to the remote sites.

The remote sites operate in the same way as an Earth Station, insofar as they transmit their data up to the satellite, which routes it back down to the Earth Station at the teleport, where it is placed on the internet, or passed off to a private circuit such as MPLS or an SD-WAN. The Earth Station hardware is generally large, or robust, as it is sending a lot of data to many remote sites. The remote sites tend to be sending back less data, and at lower speeds, than what they are receiving, such as web requests, so the remote site antennas and transmitters do not have to be as large as the one at the teleport. The remote site terminals including antenna and electronics are referred to as VSATs (Very Small Aperture Terminal). The higher the data rate, the larger the antenna and transmission equipment must be at the remote sites.

To reduce costs, broadband satellite, like terrestrial broadband, benefits from sharing bandwidth. Internet traffic is intermittent and bursty. It comes in spurts. At your internet device, you type in and request a web page. The request is transmitted over the satellite to the teleport and passed to the internet. The transmission takes mere milliseconds, then your device transmitter is idle, not sending anything. The server on the internet then sends the web page content to your device, and this takes a few seconds depending on how large the page is and how fast the circuit is. After the content is received your device receiver is idle. Because there is so much idle time, many devices can share the same bandwidth. In this way, broadband satellite prices are brought down and made affordable for typical enterprise customers requiring basic internet access.

Some traffic has special considerations, such as voice and video. This traffic is not intermittent and bursty. These “real-time” applications are like turning on a faucet and generating a steady flow of traffic. These applications require guaranteed bandwidth, referred to as CIR (Committed Information Rate). BusinessCom’s iDirect Broadband Services are optimized to support the benefits of shared high speeds for burstable traffic, along with dedicated, or sustained throughput required for “real time” traffic such as voice and video.

Note that the current discussion is based on GEO satellites. We should take a moment to recognize the NewSpace initiative, which aims to further the commercialization of space. This initiative, currently being advanced in the satellite industry will add many new, small, broadband satellites to new orbits, in the next few years. Although the basic concept remains the same, these new satellites will be placed into MEO (Middle Earth Orbit) and LEO (Low Earth Orbit) where they will pass overhead, rather than being fixed in position, like GEO satellites. They might be thought of as moving mirrors, unlike the GEO satellites that are fixed in position. Tracking antenna will be required on the ground at remote sites to track the satellite coming in and the one going out, so the connection can be handed off from satellite to satellite. The basic relaying of data will be essentially the same, although a bit more complex in how it gets from point A to point B. 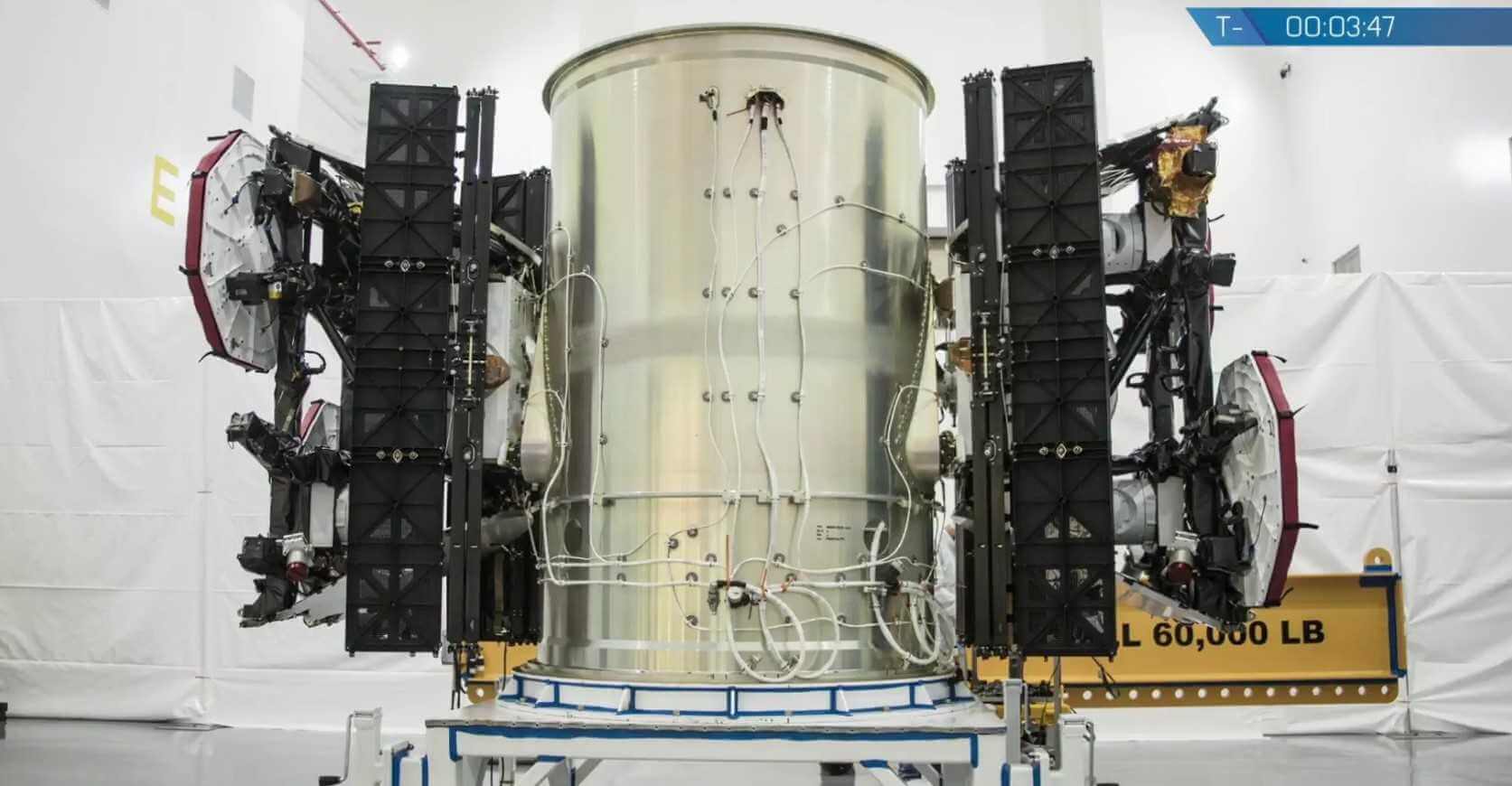 SpaceX’s two prototype Starlink satellites are seen on either side of their carrier in advance of February’s launch. (SpaceX via YouTube)

A key advantage of these new satellites will be lower latency or delay, which will benefit voice, video conferencing and traffic such as interactive video games. Visit BusinessCom’s blog (http://www.bcsatellite.net/blog/) to keep up with developments in NewSpace. BusinessCom currently partners with 03b Networks, to deliver MEO broadband satellite backhaul services for MNOs (Mobile Network Operators) and others requiring large, low latency circuits. We have our eye on NewSpace.

In all honesty, the most frequent reason is that satellite is the only option. Much of the world remains without internet access, and satellite is currently the only way to deliver it. In many countries that do have a smattering of internet options, the reliability and performance may be questionable at best. Our customers tell us stories of farmers plowing their fields along with the fiber that crossed through them, or the fiber that was dug up and sold on the black market. BusinessCom can offer broadband satellite services, based on reliable satellites, almost everywhere on the globe.

Satellite service is very reliable. There are no backhoes in the sky. Satellites can operate for decades, but are generally retired after 10 – 15 years, after the fuel used to keep them in position runs out. Since they are operating in a very harsh environment, they are designed to very high specifications, ensuring reliability that most terrestrial products don’t match. How many pieces of network equipment can go for 10 years without a reboot?

Satellite is ubiquitous. Even in locations where other options might be available, having a single integrated solution using satellite can provide simplicity and reduced management and monitoring costs. Instead of managing a dozen different ISPs in as many towns or countries, with a variety of different broadband service options, satellite can provide a single vendor solution that minimizes administrative and support overhead. Broadband satellite can do everything terrestrial broadband can do with only a couple exceptions. It can provide business quality VoIP and video, highly reliable access to Cloud applications, and really anything an enterprise requires.

It’s easier perhaps to speak of the few limitations. Latency has been mentioned above, and this can be an issue. Because satellites are so high, it takes time (approximately 1/3 second to go from earth to satellite and back to earth), and this latency or delay can affect some applications.

Voice and video are the most obvious. Streaming video is no problem, but video conferencing and voice calls over satellite will have a small amount of delay – just a little more than the delay when two cellphones are communicating with each other. This is generally not a problem unless you must go over the satellite twice. We’ve all seen the news reports where there is a long delay between the question and the answer. This is a case of going over a satellite twice.

Two other applications are affected. Interactive video gaming suffers by comparison with terrestrial broadband. Given that the round-trip latency or ping time is about 2/3 of a second (650 ms) and the terrestrial players have a delay of about 20 -30 ms, the satellite player is at a significant disadvantage. The other application is VPNs or Virtual Private Networks. Some VPNs, but not all, have performance degradation due to the latency, however BusinessCom Networks is very familiar with these issues and has various workarounds to solve them. NewSpace mentioned above, will eventually provide broadband satellite services with latencies that are as good as, or better than, those of terrestrial services.

Aside from these minor exceptions, BusinessCom Networks, broadband satellite does everything local terrestrial broadband does. BusinessCom Networks implementations include a variety of value adds such as extensive diagnostics, troubleshooting tools, optimization and compression, bandwidth management to prioritize or limit traffic according to the goals of the organization, VPN support, load-sharing and much more. Our services are designed for businesses, governments, NGOs and other enterprises. With few exceptions, our services are unlimited, unlike many residential class services that come with data quotas or some means of metered billing. Enterprises don’t want to be worrying about whether they have enough data quota to get through the month.

A key advantage, that few satellite operators offer is an SLA (Service Level Agreement). BusinessCom Networks standard 99.5% SLA guarantees service performance or issues credits for downtime for issues within our control. We provide broadband satellite services for three basic systems. Most VSATs are fixed, and permanently installed. Some VSATs are mobile and can be mounted on vehicles or packed up in crates, these are referred to as COTP or Communications on the Pause. This would be used when a “drive-away” or “fly-away” VSAT is taken to a location, deployed, auto-aligned and activated. The third option which will be growing in popularity as NewSpace moves forward is COTM or Communications on the Move. This provides satellite connectivity for vehicles, maritime vessels, busses, trucks, trains, and even airplanes, while they are moving. Please contact BusinessCom Networks and tell us about your connectivity requirements, regardless of how simple or complex they might be.