On Wednesday, January 29, 2020 a SpaceX Falcon 9 carrying its fourth batch of 60 Starlink satellites, successfully delivered its cargo into orbit. The first batch were “beta” satellites, and this was the third commercial batch, but a total of 240 new satellites have been added to LEO (Low Earth Orbit) in a very short period. The plan is to launch thousands of additional satellites. Almost immediately the cries and concerns about space debris cropped up as critics in the astronomy community loudly voiced concerns that humanity could trap itself on Earth behind a “wall of space junk” cluttering up Earth’s orbit.

Dr. Stijn Lemmons of the ESA (European Space Agency) told Scientific American “The worst case is: You launch all your satellites; you go bankrupt and they all stay there. Then you have thousands of new satellites without a plan of getting them out of there. And you would have a Kessler-type of syndrome.” Estimates are that mega-constellations such as Starlink could result in 67,000 potential collisions per year, and researchers point to the incident in 2019 when the ESA (European Space Agency) had to move one of its satellites out of the way to protect against a potential collision with a Starlink satellite.

Although unrelated to the issue of space junk, astronomers are also complaining that in addition to potential space junk, hundreds of millions of dollars of ground-based observatories could be rendered useless by the pollution of the night sky.

Bringing additional light to the subject, in late January 2020, two decommissioned satellites moving with a combined speed of 53,000 kph (33,000 miles per hour) narrowly missed each other in an orbit 900 km (560 miles) above earth. Concerns about a potential collision were raised by LeoLabs, a company that provides ground-based RADAR tracking of space debris. See: Space Debris Update. LeoLabs estimated that the two satellites would come within 15 – 30 meters of each other. Both satellites are dead and cannot be controlled. All anyone could do was watch. Had the satellites, traveling at what is referred to as hypervelocity, crashed into each other, huge clouds of debris could have been generated that could endanger spacecraft in orbit around the planet. It’s happened before. In 2009 the active Iridium 33 communications satellite struck the decommissioned Russian satellite Cosmos 2251. A field of about 1000 large objects, and countless smaller objects, ended up in low earth orbit.

There are a couple challenges that must be faced to deal with the space junk issue. New satellites need to be fitted with technology that will de-orbit them safely when their mission is complete. Existing space junk will require innovative solutions to seek out, capture and de-orbit the junk, starting with the largest pieces. Let’s look at the latest developments…

The ESA has been working on a program to remove debris from space. ClearSpace-1 is a space mission planned for 2025 which expects to be the first to remove an item of debris. The program comes about as the culmination of a competitive process led by Swiss startup ClearSpace, who will be invited to submit a final proposal before staring the project in March 2021. Citing all the normal reasons, such as there being approximately 2000 operational satellites in space and 3000 dead ones, ClearSpace touts the need for a “tow truck” to remove failed satellites from highly trafficked regions.

The ESA’s Ministerial Council at Space19+ in Seville, Spain agreed to place a service contract with a commercial provider at their meeting in late November 2019. The contract calls for the safe removal of an inactive ESA-owned object from a low-Earth orbit. Noting that if all the ships ever lost in history were drifting about the high seas, sailing would be a far more dangerous endeavor, the ESA has declared that this situation cannot be allowed to continue. Removing the largest pieces of debris is seen as the best way to stabilize the orbital environment. 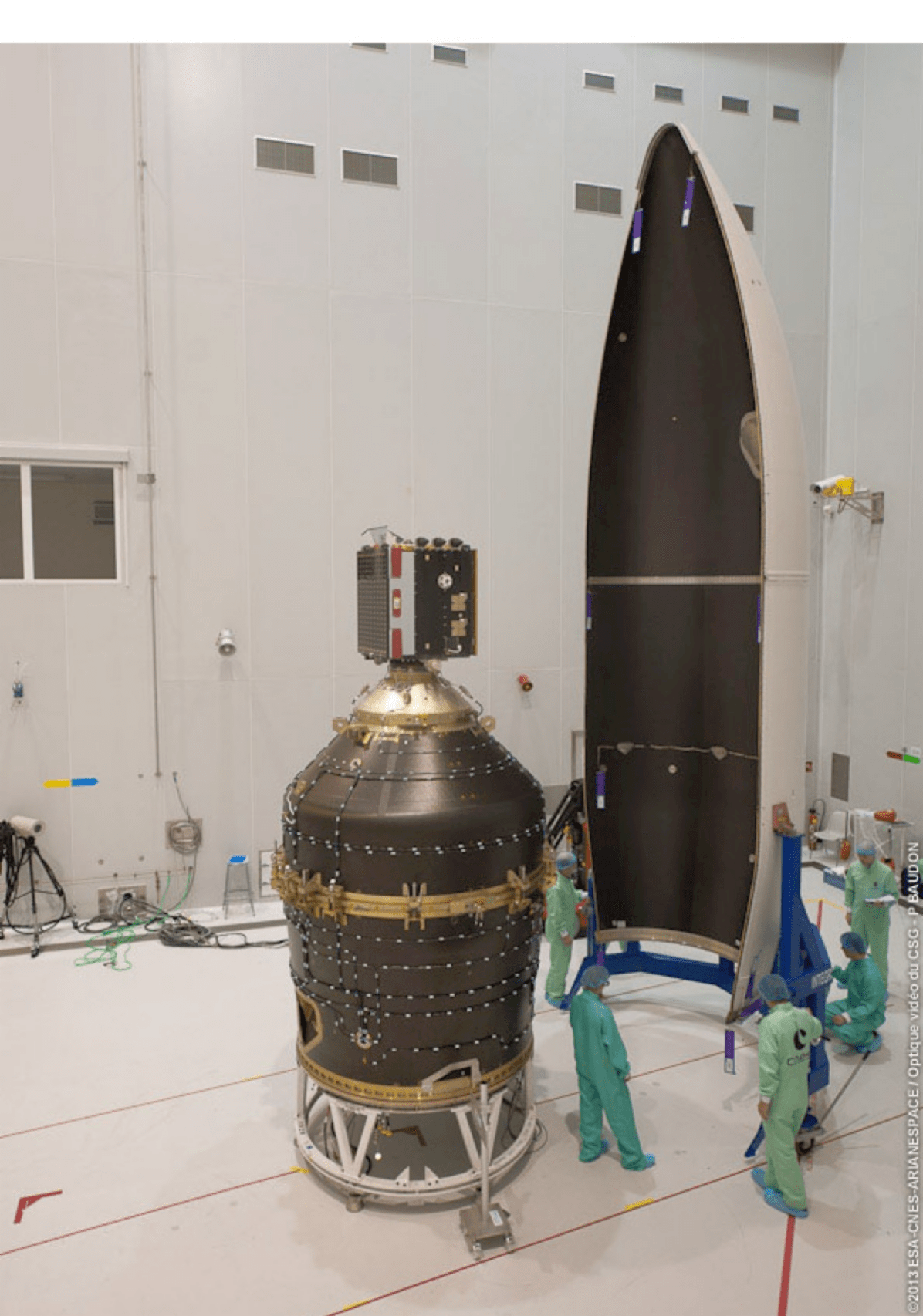 Source: ESA. ClearSpace-1 to target the conical upper part of a payload adapter

Capture methods referred to as ADRIOS (Active Debris Removal/In-Orbit Servicing) will be applied to ClearSpace1. The mission will target the Vespa upper stage left in orbit after a flight in 2013. The Vespa is about the size of a small satellite. It has a simple shape and sturdy construction, making it a good candidate for a first step mission. A “chaser” satellite, ClearSpace-1 will be launched into orbit at about 500 km. The Vespa is in orbit around 800 km. ClearSpace-1 will run a series of tests and will then be raised to the same orbit as Vespa, where it will rendezvous and capture the upper stage module with a quartet of robotic arms, operated under ESA supervision. Once captured, the combined chaser plus Vespa will be de-orbited and burned up in the atmosphere. This could be a very important step towards starting to clear space of large satellites contributing to the debris.

Removing existing space junk is certainly important, but as hundreds or thousands of new satellites are launched, researchers are seeking solutions to ensure that those satellites can be de-orbited should they fail, or when their mission is completed. Good news in this effort has been reported by Tethers Unlimited. The company deployed a small satellite called Prox-1. In September 2019 a 70-meter (230 ft) tether or tape was deployed, and this resulted in the Prox-1 immediately beginning to lower its orbit twenty-four times faster than satellites without “Terminator Tape.”

Terminator Tape is a low-cost solution for removing inactive satellites from orbit. It consists of a lightweight, compact module weighing less than 1 kg, that is attached to CubeSats, NanoSats and Small MicroSats. The small footprint does not pose any risk to the satellite operation.

The Tape is deployed by command or timer. Equipped with two optional solar cells, the Terminator Tape can operate independently of the satellite. According to the Tether Unlimited website, the tape, when deployed “generates neutral particle drag and passive electromagnetics drag to hasten the de-orbit.” When the Tape is deployed it is pulled tight by Earth’s gravity and aligned vertically. The Tape interacts with the Earth’s magnetic field and ionosphere by inducing a current as it travels at high speed through the Earth’s magnetic field lines. Basically, the satellites orbital energy is converted to electrical energy. Acting like a conductor, the electrical current created by the Tape interacts with the magnetic field creating a drag. The drag will lower the satellite’s orbit, which in turn creates additional drag, and eventually the satellite will fall into the atmosphere and burn up. The process depends on Lorentz Force interactions in which an electrical current creates a magnetic field. This field interacts with the Earth’s magnetic field which serves as a drag. Think about two magnets which can not only attract but repel.

The actuator for the tape can be activated by timer or command. It deploys the tape which is made of a “shape memory alloy” or SMA which has a special property. When cold, the tape can be deformed, and when heated it returns to its original shape. A small but constant power source is used to create the current which induces the magnetic field. By reversing the current, and with it the magnetic field, the direction can be changed, raising the satellite’s orbit instead of lowering it. This technique might suit the ISS (International Space Station) which must regularly raise its orbit by firing thrusters. 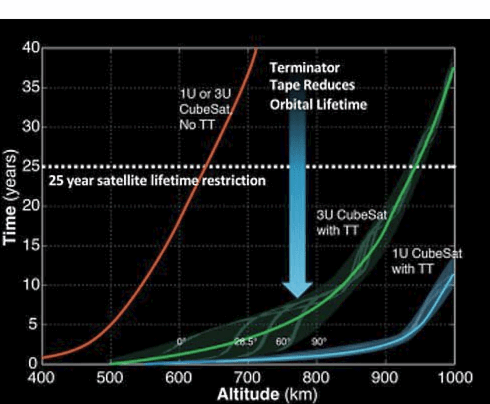 The test was initiated three months after launch when a timer commanded the Terminator Tape to deploy. It immediately began to de-orbit over 24 times faster than a normal satellite. The Tethers Unlimited solution is one that can easily be implemented with the many Smallsats being launched, and with widespread deployment, can help ensure that LEO space will remain clear of large debris.

Another test mission is being planned with Millennium Space Systems, TriSept and RocketLab with the goal of using exacting scientific controls to measure the performance of a satellite with Terminator Tape against one without it. The DragRacer mission will place a 25 kg satellite in orbit that will split into two identical packages. One will have Terminator Tape, and one won’t. It is expected that the satellite without the tape will remain in orbit for about 8 months to a year, while the unit with tape will de-orbit in a few weeks.

Space junk remains a key problem for the ongoing development of NewSpace, but there is reason for optimism as organizations like ESA develop solutions to remove existing debris, while others like Tethers Unlimited design solutions for new satellites to prevent them from becoming space junk. New satellites will require orbital debris mitigation solutions, and Terminator Tape is looking good after its first test.